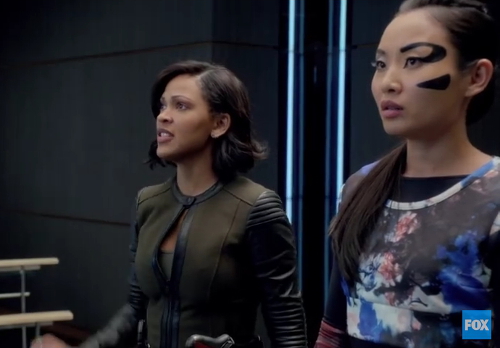 Fans had high hopes for "Minority Report," but so far the show has adapted a lot of the glitz and not much of the atmosphere of the original film. Dash (Stark Sands) gives us a likable sweet guy character, but the writing puts him more in the dopey-newb-who-freaks-out-with-painful-visions category than ethereal, sensitive medium who sees scraps of future crimes but is helpless to stop it.

Like we noted with "Blindspot," there seems a reluctance on the part of new series writers to draw anything out and let a mystery build. It's all flash-bang-boom in an effort to keep viewers engaged. With such a phenomenal big screen property as its source, "Minority Report" has to do better. Focusing more on the precogs rather than all the tough cop fanfare would be a good start.

In two entertaining pieces, "Vulture" magazine covers many of the problems inherent in the new series, including creating a future world that doesn't ask the existential questions it should. We can't believe that they never mentioned one of the main characters of the show, however: Meagan Good's cleavage.

As feisty law enforcement officer Lara Vega, Good's sole purpose seems to strut through scenes like a model on a runway, jackets worn specifically to highlight gravity and ninja-warrior-action-defying boobs. Show a little respect, "Minority Report." A woman can be strong and sexy without having to do her job in stupidly inappropriate outfits. Ugh.


"Besides Sands's performance as Dash, a likably frazzled ingenue who hurls himself bravely into action but has no physical skills to speak of, the production design is the best (maybe only) reason to watch "Minority Report." READ MORE HERE.

Also check out the "Vulture" recap of Episode 2.

Posted by Valerie David at 5:39 PM