'The Vampire Diaries' Without Elena -- Is This Really a Bad Thing? 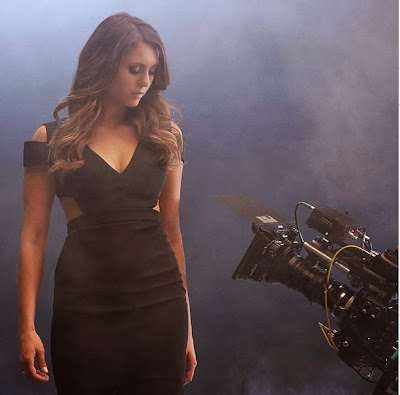 By now you've heard that Nina Dobrev is leaving "The Vampire Diaries" at the end of this season. Considering the fact that Ian Somerhalder (Damon) and Paul Wesley (Stefan) have signed on for Season 7, this makes plotting the series a bit difficult. After all, the series began as a "destined to be together forever" romance between Elena and Stefan. Then it turned into a epic love triangle. And then the "destined to be together forever" Elena and Damon.

Okay, so the show has already turned some of its own mythology on its head. But another issue is that Elena has, for the most part, been the conscience this bloodbath of a show sorely needs. She's also part of that whole doppelganger business that has been a constant thread on "TVD." We can only hope that the writers will at least grace us with some sort of an end for Elena that doesn't completely destroy the point of all we've been through.

All of that said, is "The Vampire Diaries" without Elena really so dire? You have to admit, once Katherine was done away with, Dobrev was left with the less interesting character to play. As much as this show needs a moral center, Elena could make that morality seems so whiny and insufferable. Which was partially the writing and partially Dobrev's "huffy spoiled girl" sort of delivery.

I was more disturbed by Caroline (Candice Accola) going dark, because how dare they ruin my perky, sunshine-y, order-keeping Caro? I'd rather see her and Bon-Bon being the high-road-takers on this show, though it looks like Bonnie may have fallen off the good girl wagon as well. So what's good about Elena leaving?

1. Sultry Seductive Salvatore. Whatever Elena's fate, be it death or return to human form or something else, we don't need to see a grieving Damon. And please, no flipping the humanity switch. We've had enough of that to last a vampire lifetime. Ugh.

No, if Damon is going to be single again, let us enjoy our seductive, ridiculously confident, arched-eyebrow Damon. We want to swoon. We want him to go after unattainable women again, so we can watch him work his sexy magic hardcore. If "The Vampire Diaries" only lasts another year, let it be a year's worth of Damon-inspired drool. Thank you.

2. Bonnie on Center Stage. Bonnie (Kat Graham) and Damon stuck in limbo and then Kai's (Chris Wood) witchy "Groundhog Day" prison was one of the best storylines "TVD" has ever had. We got to see Bonnie using her wits (and wit), magic, courage, and intense will to deal with her loathsome frenemy, a psycho killer, and then surviving on her own.

Sometimes there's so much twisting, turning, backstabbing, and violence on the show that you get numb. Graham sucked us into Bonnie's plight so well, and it was refreshing to actually give a damn about a character's fate. Now that her powers seem to be at pretty epic levels, it's exciting to think there's room in the show to let her take center stage more often.

I also loved the unexpected friendship and chemistry that developed between Bonnie and Damon. If Damon's sultry self decides to set his eyes on Bonnie...well...there will be no argument from me. That whole love/hate thing they have going could make for some really powerful angry sex. Just sayin'.

3. Brotherly Love. With so many storylines and so many characters, the brothers Salvatore get separated a lot. The thread of their sibling bond is always there in some form, but it would be nice to get some serious dynamic duo time going on. With the Elena stuff bonding them but now behind them, they could move on to something more entertaining. There's got to be some fun mystery to tackle in their decades of history, and maybe Mommy Dearest is going to provide that. Wherever the story takes them, let's have them do it together.

What do you think, "TVD" fans? Is the show pointless without Elena? Or are you excited to see what such a big change will bring to the series?

"The Vampire Diaries" returns to TV with the remainder of Season 6 on Thursday, April 16, on the CW.

Posted by Valerie David at 4:46 PM No comments: Links to this post