'The Mentalist' Finale -- Why Am I So Disappointed? 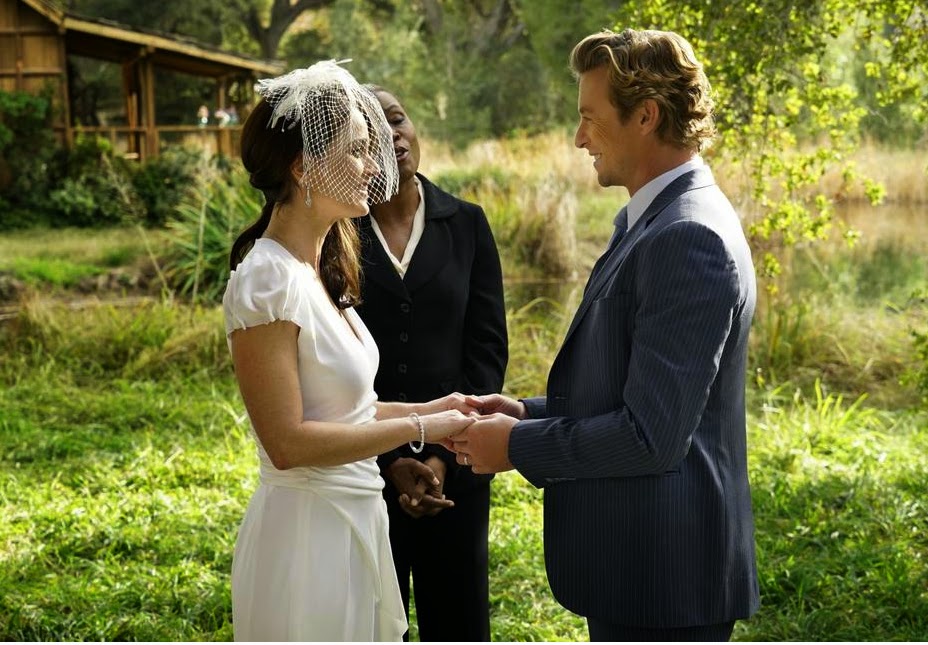 "The Mentalist" fans have been waiting for Patrick Jane to find happiness from the very beginning, and we all hoped it might be with Teresa Lisbon. So when the series finale ended [SPOILER ALERT] with a wedding and baby news, many longtime fans were ecstatic. While I was pleased to have a happily-ever-after with no painful twist for our lovely duo, it still didn't strike me as a worthy ending to seven seasons of romantic tension.

For one thing, that romantic tension seems to have slipped away in this final season. Way back in 2010, I was deeply moved by a moment when Jane and Lisbon merely touched hands. There was a huge well of emotion in Jane back then, and Lisbon seemed this perfect steady and compassionate soul that could meet all that emotion unflinchingly.

When the writers finally allowed our couple to be an actual couple, they decided to make them as chaste as possible. Suddenly Jane and Lisbon were sitting on park benches and smiling sweetly at each other, like a teenage couple in a wholesome 1950s TV show. The chemistry between them seemed totally zapped, their romantic moments always a little awkward. When we got to the big reveal that Lisbon was pregnant, I actually for a moment wondered how that had happened.

The first half of the finale, and the pursuit of a serial killer, was entertaining in a vacuum. At this point it didn't seem right to dredge up the past so keenly, with Jane as a faux psychic drawing out the killer, which once again turned out to be an extremely dangerous idea. Though I didn't appreciate the heavy-handed parallels to the start of the series, it was good to see Jane being the resourceful, insanely clever and calm Jane we know so well.

When the serial killer somehow survived a GINORMOUS EXPLOSION AND FIREBALLS, though, things got a bit ridiculous. They at least gave him some serious burns on one side of his body, but he strolled around town buying supplies, with no one reacting particularly strongly. When Jane and Lisbon discovered that the killer was still alive, they decided to trick him by GOING TO A REMOTE LOCATION and ditching all of the FBI protection, and friends and family Lisbon invited to their wedding. Um, okay.

Of course, they end up catching the killer and then go on their merry, marrying way. Somehow they get all the wedding guests over to Jane's new creepy shack in the woods, to celebrate amongst the weeds and mosquitoes. Magically they got a mansion-sized dance floor and electricity for twinkling lights into the middle of nowhere in time for the reception. Never mind all the catering and lovely flowers that Abbott paid for back at his gorgeous home. It's only money, right?

If they'd wanted to illustrate Jane's carefree nature and Lisbon's willingness to go along, I would have rather they eloped to some lovely island paradise and got married on the beach. They could have had a party with their friends either before or after they wed, in order to give us that joyful reunion. And the serial killer should have stayed blown up; all that faux drama just got in the way of the happy ending.


And there were some definite happy moments. Cho helping Lisbon pick out a wedding dress seemed sweet but crazy at first, until we realized he was the perfect person to give a truthful, straight-to-the-point opinion. The deadpan delivery of determinations like "snow cone" just made it all the funnier.

I'm totally blaming him for the bad dress she ended up with, though. We've seen Lisbon be va-va-voom before, and something a little more dramatic would have suited her better. This get-up seemed plain and kind of dumpy, and I don't know what was up with that netted headpiece.

We should forgive our fave stoic agent, however. Cho was also great with Wylie, literally smacking some sense into him and asking the kid to stay on instead of hiding in some new desk job. A Cho-led FBI force with Wylie on board--we would totally watch that spin-off show.

All in all I'm happy that Jane and Lisbon are together, but I sure would have loved something that resonated with deeper emotions. But considering the tears and cheers I've seen on Twitter, maybe I'm just too cynical.

What did you think of the series finale, "Mentalist" fans? Loved every minute, or did you feel a bit let down as well?

Posted by Valerie David at 1:51 AM