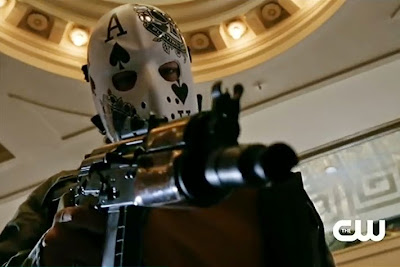 "Arrow" likes working on parallel themes, and this week's episode "Legacies" focuses on how every individual has the power to change a bad pattern. With a little push from his partner, Digg, Arrow strays from the list on a different sort of mission but still finds himself face to face with his father's misdeeds.

The flashback this week had us back in that island cave with a trapped Oliver starving to death, burning pages of his father's notebook to keep warm. He hallucinates an image of his father, who even in our hero's mind is still lecturing him about being a disappointment. We learn that Oliver always thought his father was strong, brave, and better than him. We also finally learn how all those names appeared in that notebook -- they were there all along, in invisible ink, revealed when they neared the heat of the fire.

Back in real time, Oliver is ready to cross the next bad guy off his list when Digg presents him with a more immediate problem -- a gang of bank robbers who recently shot an off-duty cop. Oliver isn't interested in anything aside from The Plan, so Digg tricks him into showing up at the hospital and meeting the victim's wife. He sees firsthand how it's not just big business hurting good people. Arrow decides to give tracking down violent bank robbers a try.

A lead on one robber's high school ring and a bit of research reveals a family on a crime spree. Oliver learns that the father worked for Mr. Queen for 15 years, before the factory work was sent to China and all the employees were laid off with no severance. Feeling even more guilt for his family's deeds, Oliver finds the man at a local bar and offers him a job -- and a chance to change the dangerous path he's headed down. The father strongly considers packing it in, but his family convinces him they need that "final score" to make it all worth it.

Meanwhile, Oliver's friend Tommy is trying to woo Laurel into a real relationship. When flashing his wealth around doesn't impress, and he gets no time from his busy crime-fighting bud, Tommy turns to Thea for a bit of girl advice. She doesn't realize it's Laurel at the time and offers up directives to show interest in the lady's interests -- and pour his heart out. Turns out it's sound advice, and Tommy makes some headway toward convincing a cynical Laurel that he's sincere. There's a small wrinkle when a jealous Thea gets drunk and throws herself at Tommy, but his sweet handling of the incident helps impress Laurel even more.

Arrow tracks down the criminal family mid-robbery and tries to take them down himself, but a security guard intervenes and the father is killed protecting his son. It's a parallel to his own life that Oliver had hoped to avoid: a father who died for his son before making up for his own mistakes. Digg assures Oliver it's not his fault, but it's another harsh reminder that even a vigilante with the best intentions can sometimes inadvertently cause more harm than good.

After blowing off another series of family engagements to do his work as Arrow, Oliver realizes he's also causing harm at home. His mother has the pain of having her son alive but not really back. At the end of the episode, he finally takes the time to bond with her again, taking her out for hamburgers and a moment away from stuffy dinners and fundraisers. They share a laugh as loving mother and son, but we know there are so many secrets between them that a true heart-to-heart is impossible for now.

Catch up on all the recaps here!
Posted by Valerie David at 12:14 AM