Will 'The Mentalist' Be Cancelled Just as It's Getting Good Again? 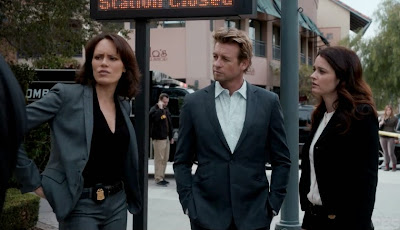 Back in Season 5, "The Mentalist" fans were worrying if the show would make it to the Red John reveal before the cancellation ax fell on it. We noted that creator Bruno Heller planned on "two seasons or so" to finish out that Red John plot. The show got that Season 6 renewal, and then the next question was whether the end of Red John would mean the end of the series.

Many viewers had grown tired of the years-long serial killer plot, but the diehards were still watching/waiting for the joy of that Patrick Jane roguish charm and his warm, often comedic bonding with his coworkers and friends. The show did, in fact, reboot itself after the whole Red John saga.

There were some growing pains as the series integrated the former CBI team into the FBI, but it seems to have found its footing now. We're getting back to the procedural style of "The Mentalist" we fell in love with back in Season 1, where Jane's brilliant mind and unconventional methods help solve crimes, to both the appreciation and exasperation of those around him.

Remember when? Relive the early days of all that yummy Lisbon/Jane romantic tension on "The Mentalist."

Now the word is buzzing once again that "The Mentalist" may finally be cancelled. No, for realz this time. Bruno Heller is moving on to work on a "Batman" series for Fox. CBS, who regularly throws away viewed-by-millions shows that other networks would kill for, has already renewed a bunch of dramas, limiting the spots available. We've been here before, but "The Mentalist" is a six-season show that's been in danger for at least two years--eventually those dire predictions are going to be true.

The possible light at the end of the tunnel is that the show could move to another network, like "Medium" and "Law & Order: CI" did successfully in the past. Now that the Simon Baker drama has shed its darker serial plot and returned to its episodic, more whimsical roots, it's an easier show to shop around. After all, 11 million viewers is not to be taken lightly, and there are definitely going to be some cable networks at least who will be interested in trying to nab this one.

What do you think? Is "The Mentalist" worth saving in its rebooted form, or has it run its course? Would you follow it to another network?

**UPDATE: CBS decided to hang on to "The Mentalist" for a while longer...