'Arrow' Recap: Oliver Tracks a Fireman-Killer and Nearly Gets 'Burned' 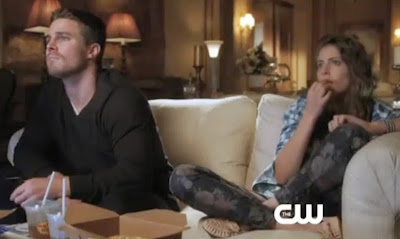 In the "Arrow" episode "Burned," Oliver and his mother both avoid their responsibilities under the pretext of caring for their family. Oliver's difficulties result from his run-in with the Dark Archer, and Moira is struggling with the absence of yet another husband.

Our hero is healing physically at the start of "Burned," but we can see psychologically he's been damaged. Digg tries to get to the bottom of why Arrow isn't picking up with the list again, but Oliver puts him off, letting him know that his troubled family comes first.

Moira has been housebound for weeks now, unwilling to even come to dinner with her children. When Oliver asks Thea what snapped their mother out of her depression over their father's death, she tells him that Walter was the one that finally got her out of the house. This time, a solution seems less clear.

Despite his reluctance to get back into the vigilante game, Oliver finds it difficult to avoid it when Laurel needs Arrow's assistance. Her best friend at work, Joanna, has just lost her firefighter brother in an accident. The report of the fire, however, indicates he may have been murdered.

Laurel goes to her father for help, but his hands are tied with bureaucracy. She happens to be there when a forensics tech returns Arrow's phone to Detective Lance, saying it's untraceable. When he explains that it's a way to contact "The Hood," she, of course, steals it and contacts the vigilante herself. 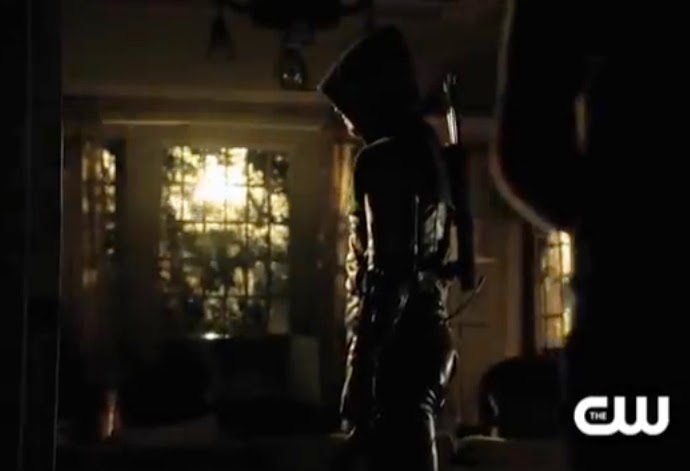 Oliver shows up at her apartment in full archer gear, keeping turned away from her and altering his voice electronically. He agrees to look into the case. Digg is surprised when Oliver tells him to find out what he can so that they can give the information to the police, instead of dealing with it himself.

In this week's flashback, we see Oliver all alone on the island after his protector is captured. He's pursued into the woods, and a frightening altercation leads to a tumble down a cliff. Oliver plucks himself from the waters below, but his enemy lies broken on the rocks. It's the rich playboy's first kill in combat. He buries the man and takes his gear, finding multiple keys and a map of the island.

Back in the present, Digg follows the clues about a truck at the original fire and discovers another potential murder in progress. Oliver is forced to suit up as Arrow, but he gets there too late; the killer overpowers him and escapes behind a wall of fire.

Shaken by the experience, he tries to disentangle himself from the case, but he's unable to leave Laurel on her own for too long. When he talks it over with Digg, he shares that all the time on the island, he never feared death because he had nothing to live for. Now he feels he does, and he's worried that it's a weakness. Digg tells him that he needs to consider it a strength -- to have something worth fighting for.

Oliver and Laurel's investigations eventually lead to a fireman who was supposedly killed in a high-rise blaze years before, left alone after his company was called to retreat. Escaping the fire with severe burns, he sought revenge on those he felt abandoned him.

The disfigured killer appears at the fireman's benefit party Tommy's hosting at Oliver's future nightclub, targeting his final victim, the fire chief. He sets the warehouse ablaze, sending the guests running. Digg helps get everyone to safety, and Oliver zips to his secret lair to don his archer gear, returning just in time to keep the fire chief from being burned alive. He tries to talk the killer into seeking help, but it's too late; he's too mentally damaged, and he walks into the blaze to let it consume him this time.

Back at home, Oliver is pleased that a news report calls the "vigilante" a hero. Then he discovers that his mother has snapped out of her depression, thanks to an angry motivational speech from Thea. He's happy she has decided to step up and take Walter's place in the company, but Thea is suspicious at the quick turnaround from Moira.

Laurel gets confronted by Detective Lance about the phone she stole, but to her surprise, he tells her to keep it. He says he's happy there's someone else out there helping keep her out of danger. But then we find out that he's bugged the phone, so that he can use it to track down the vigilante. "Using your daughter as bait," a police tech marvels. "That's cold."

Catch up on all the recaps here!