Catch up with 'Arrow' Recaps Here! 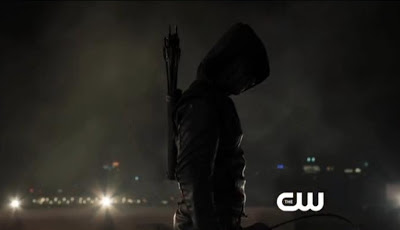 Welcome, "Arrow" fans! If you're new to the show and want to catch up, or missed an episode, or if you just want a refresher before the next installment, this is the place.

Bookmark it and you'll always know where to turn for the latest adventures of our favorite hooded hero.

The pilot episode introduces us to Oliver Queen, a billionaire playboy who was shipwrecked on an island for five years before being rescued. In his time on the mysterious island, he's developed some scary and useful skills, and embarks on a secret quest to rid the city of corruption and violence.

The "Arrow" episode "Honor Thy Father" delves deeper into Oliver's emotional scars, his past on the island, and the dual life he must now lead.

In the episode "Lone Gunmen," Oliver faces a deadly assassin who's also targeting the men on his father's list.

Episode 4: Laurel and Oliver Work to Free 'An Innocent Man'

Arrow tries to work with Laurel and show the "new Oliver" he's become, but it turns out she doesn't much like the new guy either. After revealing his identity to Digg, it also appears Arrow's vigilante career may be over.

"Arrow" takes us back to the island, and we find out how Oliver got those nasty scars, and how he found his own honor code. We also discover the hooded hero's plan to get himself out of being arrested.


In this week's episode, "Legacies," Arrow strays from The List and tries to help one of his father's victims turn away from a life of crime.


In the "Arrow" episode "Vendetta," Oliver tries to put Helena on a less deadly path to justice. He opens up his heart, but will his readily-given trust be misplaced?

Episode 9: Oliver brings the family together at 'Year's End'

In "Arrow" episode "Year's End," Oliver relives memories of the island, tries to revive Christmas celebrations with his family, and is confronted by a dangerous new archer and adversary.

Episode 10: Oliver tracks a fireman-killer and nearly gets 'Burned'

Oliver struggles with the physical and emotional scars from his battle with the Dark Archer, but Laurel draws Arrow back into action with a case involving a string of murdered firemen.

Episode 11: Diggle learns the hard way to 'Trust, but Verify'

Oliver gets caught in the middle of a rift between his mother and sister, Diggle finds out his former commander might be involved in some seriously criminal business.

In "Arrow" episode "Vertigo," Oliver has to save his sister from jail time for her DUI, and bring down the drug lord who made the dangerous Vertigo hallucinogen that caused her car crash.

Episode 13: Oliver and Laurel feel the sting of family 'Betrayal'

In "Arrow" episode "Betrayal," there's a new villain in town, and he's ready to use Laurel to help him take out the vigilante archer standing in his way.

Episode 14: Wounded Oliver re-lives his own version of 'The Odyssey'

In "Arrow" episode "The Odyssey," our hero gets shot and relives a flashback of his mission with Slade to get them both off the island.

Episode 15: Oliver, Diggle, and Felicity go after the murderous 'Dodger'

In "Arrow" episode "Dodger," Oliver and Digg get help from Felicity to track down a thief who straps bomb collars to his victims and forces them to commit his heists for him.

In "Arrow" episode "Dead to Rights," Oliver discovers the attempt to assassinate Malcolm, and works with Felicity and Digg to intervene.

In "Arrow" episode "The Huntress Returns," Oliver is forced to make a choice between trying to redeem Helena and saving the lives of innocent people.

Episode 18: Criminals Pray for 'Salvation' From a New Vigilante


In "Arrow" episode "Salvation," Oliver, Digg, and Felicity face one of their toughest tests when a vigilante starts kidnapping perceived criminals and executing them online--and he can't be traced.

Episode 19: Oliver and Diggle Both Deal With 'Unfinished Business'

In "Arrow" episode "Unfinished Business," the city is taken over with a new, deadlier form of Vertigo. Oliver must track down The Count again, while Diggle is distracted by pursuing Deadshot.

In "Arrow" episode "Home Invasion," Oliver makes hard choices with the best intentions, only to have it backfire and hurt the very people that mean the most to him.


Episode 21: Malcolm sets plans in motion for 'The Undertaking'

In "Arrow" episode "The Undertaking," Malcolm's plot is finally revealed, Oliver finds Walter and learns the truth about his mother.

Episode 22: 'Arrow' Recap: Oliver and Felicity Land in Serious Trouble When They Try to Prevent The Undertaking


In "Arrow" episode "Darkness on the Edge of Town," Malcolm takes care of loose ends as The Undertaking is about to get underway. Unfortunately, one of those loose ends turns out to be Oliver.

Episode 23: Who made the ultimate sacrifice?

In the "Arrow" season finale, "Sacrifice," all of our heroes come together to try and save the city, but not everyone will make it out alive.