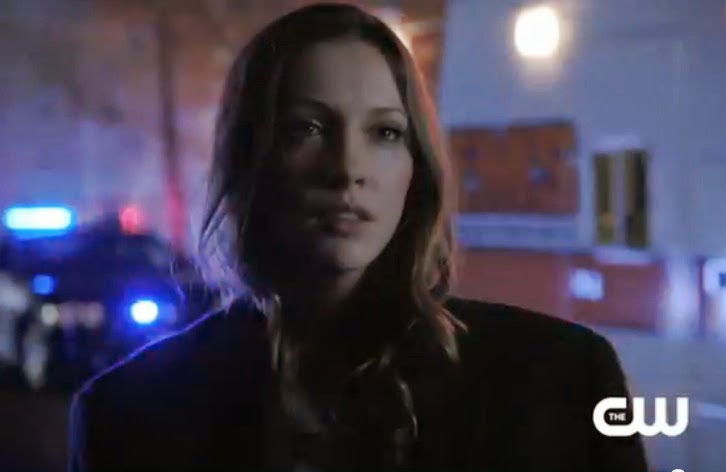 The premiere season of "Arrow" has been running at a breakneck pace, and episode "An Innocent Man" overflows with twists and reveals some of the biggest challenges Oliver has faced yet. The rich playboy at first seems to have leapt several hurdles in his quest for justice and in embracing the new-and-improved Oliver, but events take a sharp turn to put Arrow in serious jeopardy.

Revealing his secret identity to Diggle at first doesn't initially go as planned for Oliver. The groggy and wounded bodyguard takes a swing at him, calls him a vigilante murderer, and scoffs at the idea of working together. We wonder if Digg is going to turn him in, but Oliver arrives home without incident.

That is until he's taken to task by Laurel, who was waiting at his home to find out if he was OK. It's clear that leading a secret life sometimes means you leave the people you care about hanging, and Laurel accuses him of being supremely selfish. The only good news is that his sister Thea seems to be on his side, and she suggests that Oliver start showing Laurel the "new guy" that he feels he's become.

New recruits to join the fight

After catching a story on the news about Peter Declan, a man about to be executed for murdering his wife, Oliver learns that the victim worked for one of the bad guys on his list. He sets up a scary shadowy-guy-in-dark-apartment meeting with Laurel and tells her to look into the case. Though she's a bit uncomfortable with his methods, she goes ahead and follows the leads with his help, but even tying a bribed witness to train tracks doesn't get them enough evidence for a stay of execution. Detective Lance figures out that Laurel's been helping out Arrow and he lectures her, earning a sharp retort that the police never did their job right in the first place.

Reassured by the fact that Digg didn't turn him in, Oliver makes another stab at recruiting him. He tells him the truth about how his father killed himself in the lifeboat and says that going through the list is about helping the people of the city, as well as righting the wrongs his own family has committed. He also drops the bomb that the assassin he just killed was probably responsible for Digg's brother's death.

Laurel visits the prison to try to reassure her client Declan and gets caught up in a prison riot designed to end with her death. She helpfully adopts the dumb-female-victim role and instead of taking cover, runs directly into the crowd of rioting prisoners. Luckily Arrow, who's donning a ski mask, has shown up just in time to rescue her, but she has to save him from pummeling her would-be assassin to death. She later tells her father that she agrees with him on the dangers of hanging with Arrow, that he's a cold-blooded killer. From his rooftop perch, Oliver overhears; all his previous joy at working with Laurel evaporates.

Throughout the episode, we're given flashbacks to the island, where the hooded figure forces a starving Oliver to kill his own food. He also warns the remorseful young man that a helpless bird won't be the only thing he has to kill to survive. We see how his transformation began and how the "new Oliver" is really not fit for normal society.

Enter Digg, who has considered Oliver's offer and accepts -- but not as his "sidekick." He feels that Arrow needs someone to balance him out, to keep him from permanently becoming that scary, remorseless guy that struck fear into Laurel's heart earlier. Oliver doesn't have time to enjoy the new partnership, however, as Detective Lance arrives to arrest him. A review of the security footage from the sniper attack revealed our hero's costume grab in the hallway, evidence that he's Arrow.

Secrets on top of secrets

If that wasn't enough shock for one episode, Oliver's step-dad Walter does a little digging into a 2.6 million discrepancy in his company's books and discovers his wife has a shell company with a mysterious warehouse. He visits the location and is stunned to find the wreckage of the Queen men's boat inside.

Meanwhile, Moira has another secret rendezvous with the shadowy figure in the limo, who turns out to be played by John Barrowman, a.k.a. Captain Jack from "Doctor Who" and "Torchwood" fame. As they go over the names of the men Arrow has targeted, Moira realizes he is "targeting the list." What will happen when Oliver's arrest reveals he is Arrow?