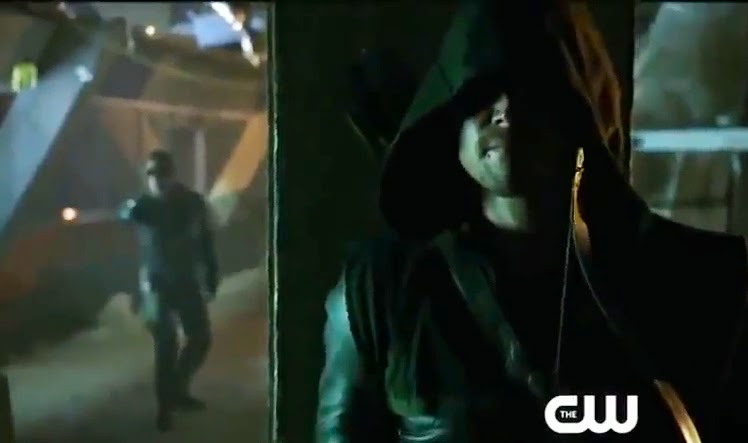 The third episode of "Arrow" amped up the pressure on our hero, Oliver Queen. With a deadly assassin targeting his own hit list, a wayward sister getting busted for shoplifting, and his bodyguard getting way too close, Oliver realizes it's all too much even for a budding superhero to handle alone.

Arrow visits another villain on his list to offer up a chance at redemption, but a sniper takes out the target before he gets a chance. Grazed by the deadly bullet, Oliver heads back to his hideout to nurse his wound, only to realize the bullet was also poisoned. Luckily, he learned about some herbal antidotes from his mysterious hooded friend back on the island. A friend, we see in flashbacks, who helped protect him from some other, scarier dudes in the jungle.

Once he's recovered, Oliver does his own investigation of the crime scene, and the clues lead to the Russian mob. Because he speaks Russian and has the right tattoo, the famous playboy is somehow able to pass himself off as one of their own -- including a background check into his false identity. One of the mobsters gives him a lead on the assassin Deadshot (Michael Rowe), a lethal killer for hire that tattoos his victims' names all over his body.

Oliver is still struggling to help his troubled sister and decides to enlist his mother's help. Thea doesn't seem too interested in Mom's new discipline, until the two finally have a heart-to-heart chat and share a memory about Dad. Both agree to try to have a better relationship.

Meanwhile, Oliver decides to build a night club over his secret Arrow base to provide cover for all of his late-night outings and an excuse for his being in the run-down neighborhood. While scoping out the competition at a former rival's club, Oliver learns about Laurel and Tommy -- and decides to be totally cool about it. After a fight breaks out with the owner, he also learns that Laurel can kick some serious butt, thanks to her dad's insistence on self-defense classes.

Arrow gets the jump on Deadshot at the murderer's favorite hotel, but with a little help from his arm cannon and swift moves, Deadshot escapes. Our hero does manage to snag the bad guy's laptop and learns his next target: An auction, where businessmen bid to buy another company, that his own family is attending. Knowing he can't protect everyone from his deadly adversary, Arrow sneaks up on Detective Lance and forcefully passes along the information about the possible hit.

Despite their best efforts, several people are shot, though Detective Lance manages to save Walter's life, and Digg gets Oliver's mother and sister out of the building. Oliver dons his Arrow gear and heads up to the sniper's perch, confronting Deadshot in an arrow-to-bullet showdown. A well-placed arrowhead plunges into Deadshot's elaborate strapped-on monocle, but the bad news is that a snooping Digg has gotten shot with one of those poisonous bullets.

Oliver makes a bold decision, taking Digg down to his Arrow lair to get him the antidote for the poison. As the episode "Lone Gunmen" fades out, we see that Oliver has decided to reveal Arrow's true identity to his bodyguard.