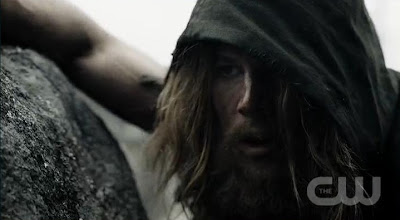 In the "Arrow" premiere, we're introduced to Oliver Queen, a looking-worse-for-wear wild man on an island, who lights a bonfire to catch the attention of a passing ship. The horribly scarred refugee gets rescued and brought back to civilization, where it's revealed he's a well-known playboy who was famous mostly for partying and irresponsible behavior--five years ago.

What happened in those five years? We're not sure, but somehow Oliver picked up some badass military/martial arts/superhero skills that he's hoping to use to wipe out all the corruption and violence in the city. He quickly readopts his useless trust fund boy persona as a cover for his nightime jaunts of scaring/killing bad guys with his mad archery skills.

Oliver has a plan, but it's not easy readjusting to being back home. His mother has remarried and his step-father is running the family business. His kid sister is angry and rebellious and turning to recreational drugs. He's happy to see everyone again, but doesn't yet know how to let them in on what happened to him.


As the pilot unfolds, we learn that Oliver was on a boat trip with his father, and his girlfriend's sister Sarah. Apparently he invited Sarah for a little cheating rendezvous, but it ends in tragedy when the boat breaks apart in the storm. Oliver, his father, and another man survive, but Sarah is sucked down into the water.

Their hope in the lifeboat diminishes, and so Oliver's father decides his son is the one who needs the food and water that remains to survive. He shoots the other raft survivor, then himself, but not before revealing to his son that he's been a bad person in his life. He has a list of people that have been complicit in ruining their city for personal gain, and wants Oliver to get back home and right the wrongs he's committed.

Needless to say, Oliver's ex Laurel has conflicting emotions over her boyfriend's return. She clearly still has feelings, but considering how he betrayed her and was indirectly responsible for her sister's death, it's tough to feel happy that he's back from the dead. Her father, police detective Lance, hates him even more. He's also extremely determined to hunt down the vigilante with the bow and arrow that he feels is just as dangerous as the bad guys he's taking out.


Oliver's best friend Tommy tries to get him back into the fold of partying and enjoying life, doing his best to conceal the secret that he got hot and heavy with Laurel a few times. Oliver attempts to reintegrate to help with his cover, but he's not in town long before he's kidnapped and interrogated for information on what he knows about his father's business.

This is where we get to see Oliver turn assassin, taking guys out left and right, and Tommy catches a glimpse. Luckily he backs his friend up in the story to police that the hooded guy with the arrows saved them from the kidnappers. Tommy doesn't seem to know exactly how to handle this new side of his bar buddy, and we're left wondering if this will come back to haunt Oliver later.

After the kidnapping, Oliver's mother insists he have a bodyguard, which makes life a bit more difficult for carrying on Arrow's secret work. Though Diggle is an ex-military man, Oliver manages to give him the slip a number of times, in order to sneak off to one of his father's old factories that he'll be using as his superhero lair.

The final big twist of the episode comes when we learn that Mrs. Queen was the one who had her son kidnapped and questioned. Clearly she's hiding some part of the family secrets Oliver's dad warned him about.

Watch "Arrow" on the CW, Thursday nights at 8/7c.
Catch up on all the recaps here!