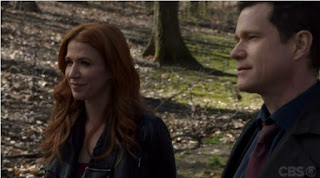 It's tough to be a TV series on CBS these days. The network is so successful that a show with millions of viewers will still get cancelled--as it doesn't have as many millions as the series ranked above it. More importantly, there's the almighty ad demo, and most of these shows unfortunately lost ground on that coveted younger audience as time wore on.

"Unforgettable" fans aren't happy, and they're a pretty sizable bunch, considering the show was averaging about 11 million viewers per week. It's tough enough letting go of a favorite show, but the mystery of Carrie's (Poppy Montgomery) sister's murder will now go unanswered. While I feel for the viewers who enjoyed this drama, the show was lacking some important qualities, which I discuss over on Yahoo!TV: "Should CBS's 'Unforgettable' Be Forgotten?"

My only regret about the loss of the rookie show about rookie cops, "NYC22" is that poor Adam Goldberg just can't seem to catch a break. First there was cancelled series "Relativity" back in '96, which ironically also starred Poppy Montgomery. Then there was short-lived "The $treet" with future movie star Bradley Cooper in 2000, followed by the blink-and-you-miss it comedy "Head Cases" with Chris O'Donnell.

Goldberg also appeared in "Friends" spin-off "Joey," and 2009 series "The Unusuals" with Oscar nominee Jeremy Renner. Goldberg has practically made a career out of quickly-cancelled series. Once again he brought that intriguing blend of dark comedy and pathos to "NYC22," but the show just seemed to be trying way too hard to be "edgy" and "cool" and we literally forgot to watch it after 2 episodes. The Sunday night timeslot couldn't have helped its viewing numbers, either. Plus we want to smack the person who thought Leelee Sobieski made a believable policewoman.

"A Gifted Man" never quite gelled with audiences either--it was an odd premise that wasn't executed very well. "Rob" actually had decent numbers, but since it lost a lot of its "Big Bang Theory" lead-in, CBS will be looking for something better. And I think we can all agree that "CSI:Miami" has had a good run. Eventually three versions of the same show gets to be too much for any network (see "Law & Order").