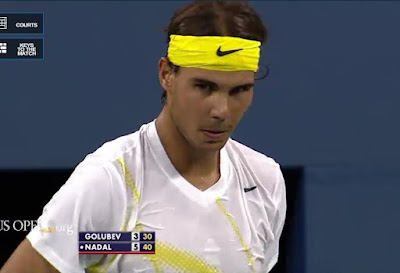 After Roger Federer took us to a bit of a nailbiter match in round one of the US Open, we fans were hoping to see some stellar Rafael Nadal play to soothe our souls. While Rafa played a pretty clean and solid game, it was also fairly tame, and he ended up playing constant catch-up with a wildly aggressive and determined Andrey Golubev. 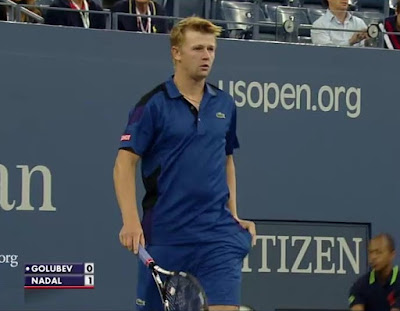 It's sometimes astounding to see how little difference there is between a number 2 player in the world, and a guy hovering between 50 and 100. These guys all know how to play serious tennis, and Golubev made some beautiful shots on Rafa tonight. So many shots, in fact, that the Spaniard was left shaking his head after many a point. 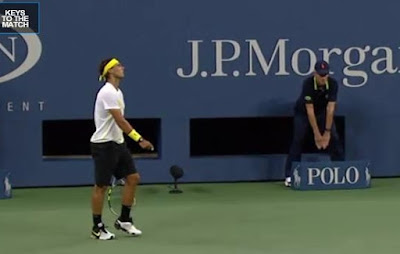 Rafael is where he is, however, because he never freakin' gives up on a game. He doesn't care if the match goes into back-and-forth deuce points for an hour, he'll still keep rallying. If he's down, he'll get back up. While the other guy tires, he keeps right on going. He sweated through two shirt changes, but he didn't slow down. 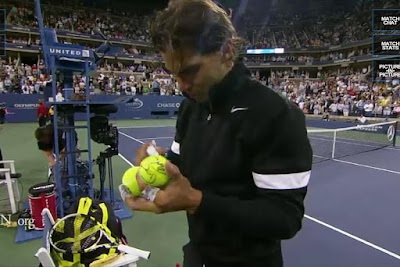 Fans went crazy as Rafael lobbed balls into the audience, and the Spanish hero looked relieved and happy to have climbed over his first hurdle at the US Open. If you want to know how he managed it, you can check out the full analysis: 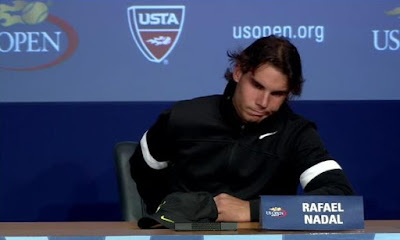 Rafael's expressive face says it all in the post-match press conference, where he gives plenty of credit to his vigorous opponent: "He didn't help [my nerves] because he played fast all of the time." Now with a win under his belt and not too many mistakes to lament, Rafael can hopefully settle his nerves and play a more finely-tuned second round match.

Posted by Valerie David at 3:29 AM No comments: Links to this post

US Open Day One: Roger Federer Works on His Game 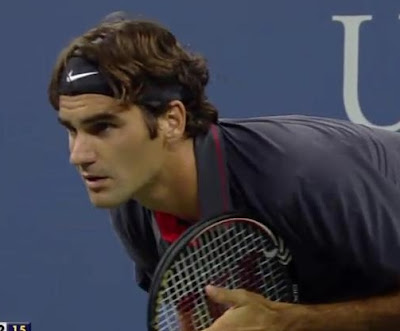 Roger Federer had me fired up at the French Open, thumbing his nose at all of the naysayers when he broke Novak Djokovic's incredible streak of wins. The Swiss tennis star was pure beauty to behold, sliding all over the bright red courts with the elegance of a ballet dancer and enough power on his strokes to rattle Djoko's cage.

While the eventual loss in the final to both friend and nemesis Rafael Nadal was sad, it was still great tennis and Federer still seemed pleased with himself after the match. The glory was short-lived, however, as Fed went out in the quarters at Wimbledon. He hasn't really recovered since.

It hasn't been the best year for Roger Federer, though of course that's all relative. With all the records he has to his name, anything less than constant perfection is considered a disappointment--but we're sure his opponent in round one of the US Open would love to have had Fed's year of consistent quarter, semi-final and final visits. 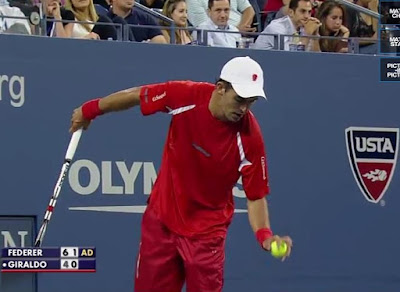 Despite his solid skills, fans can't help worrying when it takes Fed so long to dispatch a lower-ranked player like Santiago Giraldo. The headlines are taking the 3-set victory as a cake walk, but anyone who watched the match knows there were some times when we wondered where the real Roger Federer was. 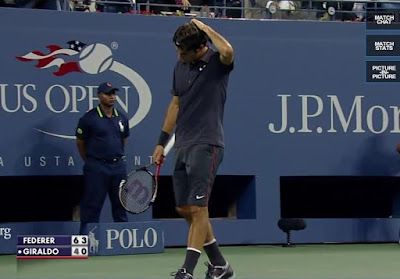 Here we see Federer scratching his head, trying to figure out why it's not going as easy as it should. Eventually he found his stride, and we discovered there was a method to his madness. You can check out the full analysis of the match here on Yahoo!. 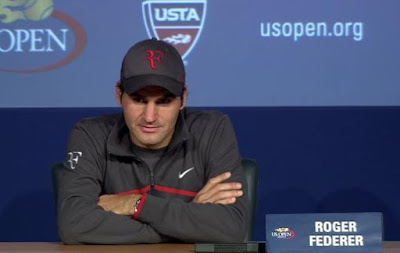 Roger was his usual calm, mildly superior self during the post-match interview, though he did admit to the fact that he should have dispatched his opponent faster. While he's still a little spiky about press questions, Federer has been making some changes over the last couple of months. You can read more about that here:

Roger Federer US Open Series: Can He Move Past Losses to a Slam Victory?

While we're on the subject of tennis and the top players, you might also be interested in: 3-Way Rivalry: Are Djokovic, Federer and Nadal the Rock-Paper-Scissors of Tennis?


PHOTOS: US Open Round One screencaps, Roger Federer vs. Santiago Giraldo, c2011 USOpen.org.

Posted by Valerie David at 2:14 AM No comments: Links to this post 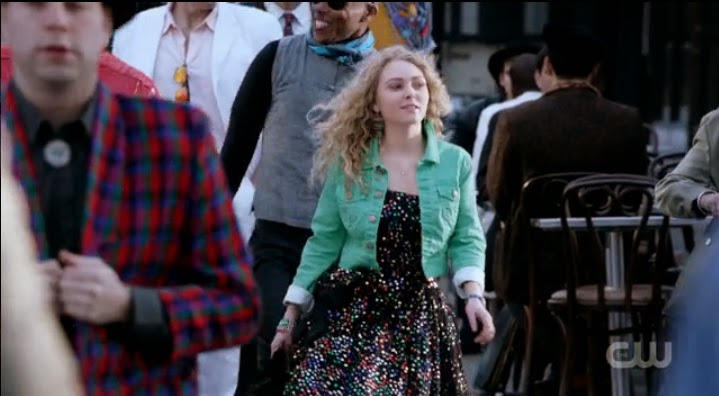 Rumors have been circulating for awhile about a possible film prequel to the "Sex and the City" TV series, but nothing has been confirmed. Now word is out that the prequel may in fact be a CW TV series with writer and producer connections to that network's hit show "Gossip Girl." Based on Candace Bushnell's novels that begin with Carrie Bradshaw in high school, the new series could potentially be a success with diehard fans of the original HBO series as well as new teen CW viewers. Prequels have their pitfalls, but there are five ways the new "Sex and the City" could be a new television hit.

1. Go a little more gritty. Over the years, "Sex and the City" got to be more about the clothes, glamor, and outrageous sex rather than the realistic stories of friendship and dating in New York. If the new series could adopt more of a "My So Called Life" real-person, real-life vibe rather than a "Gossip Girl" super chic sheen, it could pay tribute to the start of the original series as well as creating its own signature style. Candace Bushnell's prequel book series gives Carrie and her friends plenty of character quirks, insecurities and drama to deal with, so the new "Sex and the City" would definitely work well with average and awkward teens rather than perfectly styled 24-year-olds pretending to be teens.

2. Add cameos from our favorite characters. So far, the early days of Carrie only include an appearance by Samantha Jones. A treat for fans of the HBO series would be to include glimpses of other characters in the new show. Bushnell's storyline has Carrie in New York City after high school, so it wouldn't be at all unrealistic for her to brush past Stanford on the street or hear Anthony making a scene at a club. Carrie wouldn't have to recognize them at the time, but the fans would. Of course the ultimate gift would be a near-miss of a meet cute with young Mr. Big, which would be a treat for viewers while still preserving their eventual meet-up in the original "Sex and the City" series.

3. Show Carrie's transformation. When "Sex and the City" began, Carrie was the most level-headed and easy-to-identify-with character on the show, so it's not tough to imagine a smart teenager with a sharp wit we'll enjoy cheering on each week. Since she wasn't born with a cool writing gig, designer wardrobe and expensive shoe collection, however, there's great potential to watch our favorite aspiring author slowly find her confidence and style. There's got to be that important moment when she buys her first pair of high-end, hot pink '80s stilettos.

4. Stay true to the time period. The "Sex and the City" prequel would be set in the '80s, which gives the costumers and make-up artists plenty of fun style to work with. Eighties fashion is slowly working its way into current fashion, so there's the danger that the characters might end up looking like modern CW girls rather than properly preppy or New Wave fashionistas, with a little '70s style lingering on from the previous decade. Showing Carrie's experimentation with a quirky mix of '80s fashions and some personal innovation will help keep the show fresh, and also prevent it from looking like some stereotypical neon and spandex style explosion.

5. Create compelling characters. The problem with prequels is that we know how the story ends. While it could be entertaining and enlightening to see Carrie's origin, it could also be tougher for viewers to care about her relationships when it's obvious the guy won't be The One. Anyone who's watched repeats of the original "Sex and the City" series, however, knows that it's still fun to see Carrie's dating misadventures because the characters she meets are interesting and funny--and in a lot of cases, extremely hot. Hook Carrie up with some gorgeous guys we actually care about, and we won't mind taking the journey with them, no matter how short-lived it might be.

What do you think, Yahoo!TV readers? What elements would make a "Sex and the City" prequel succeed?

Posted by Valerie David at 3:23 PM No comments: Links to this post