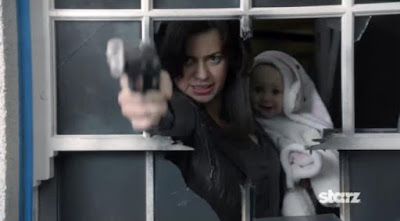 One of the first things that's enjoyable about Torchwood -- Miracle Day is that Gwen Cooper (Eve Myles) kicks serious butt in this premiere episode, "The New World." The pic above is my favorite scene from the premiere episode, the new mom holding her baby with one hand and firing with the other--and yes, she remembered to protect the baby's ears with ear muffs...hah. Probably not entirely realistic, but it's a great sort of graphic novel heroine shot.

I also liked that the Gwen we have here is consistent with the Gwen of the first season of Torchwood. That Gwen was curious and always on the hunt for answers, which is what got her hooked up with Captain Jack in the first place. Now we see her hiding away, trying to protect her family, but the instinct to ferret out answers to the world's (universe's) great mysteries is still strong. 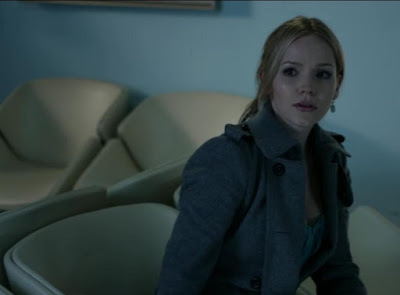 The bad news is that the American version of Torchwood chose to balance Gwen's tough mother role with the CIA employee Esther--a so typically American TV star who is tiny and frail and blond, but who we're supposed to believe is all tough and ready for danger. Soap star Alexa Havins really does a fine enough job with her role, and she's not too squeaky as the damsel-in-distress at least, but it would have been nice for a Brit-based show to think outside the box on casting the American version. At least Havins is 30 and not 18, so I'll give them that.

There's also Dr. Vera Juarez (Arlene Tur) who does well as the doctor who treats CIA agent Rex Matheson (Mekhi Phifer), and then explains how everyone in the world seems to have stopped dying--regardless of their injuries. She loses a bit of her credibilty, however, considering the fact that at one point she's dispensing treatment while wearing her white coat open over her red cocktail dress and stiletto heels. Very professional.

(Alert: Spoilers for Episode 1) The premise is intriguing, and one of the things Torchwood has always done well is to pursue an idea to its limit--whether for good or bad. Here we see what most would initially consider a "Miracle Day"--no one dies. Loved ones return to their families, accident victims get a second chance at life. People start thinking about the potential for immortality.

But then there are the terrifying downsides that most wouldn't have considered. Like the fact that these people live through their ordeals--but are still suffering in agony from their injuries or illnesses. A guy gets blown up by a bomb--but still lives. Not such a good thing after all. Never mind sudden population explosions. 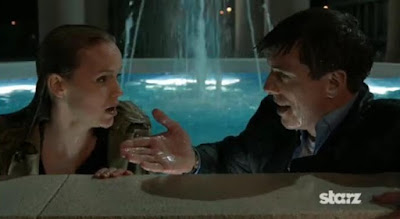 Captain Jack (John Barrowman) is a little bit more like his old self, and gets to have a cool, spooky entrance into Esther's life--and then gets to turn on the charm just a bit. He's obviously still shrouded in what happened to him during "Children of Earth," but reuniting with Gwen puts a little sparkle back in his eye. These two are definitely good together, and Barrowman's and Myles' enthusiasm for the project shows in their performances and in the glow of their reunion.

Captain Jack gives us an added bit of drama to this Torchwood -- Miracle Day storyline. The entire world has turned immortal, and the already immortal Jack is now...mortal. This is a pretty scary time to be flesh and blood, when all the world feels--and is--invincible. 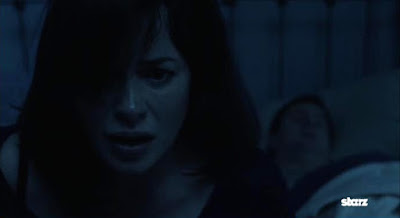 The story is compelling, and the mystery of who/what caused this sudden "Miracle Day" is delicious enough to make me want to tune in for more. I'm also happy to see Captain Jack and Gwen back in action with rocket launchers and a ready-for-anything attitude.

What doesn't quite work yet is Russell Davies' approximation of how Americans talk and act. I guess American writers probably portray Brits as too stuffy and stiff, and saying "mate" all too often, but in Davies' case, his "I'm so tough and cool, I swear and stuff and don't give a crap about anyone because I'm American" version of Rex is kind of annoying and a bit...'80s Lethal Weapon. I mean, heck, his name is "Rex." You can't get anymore '80s than that. 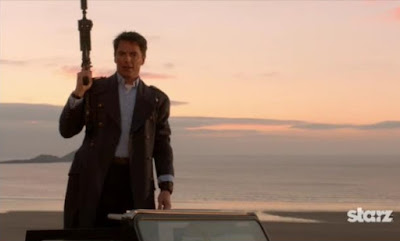 Davies has also had a problem with overindulgence on the Torchwood series. Because Doctor Who was considered more of a family program, I guess he perhaps felt limited when writing for that show, so he turns all of that desire for "adult" and "arty" vibes onto Torchwood. Therefore you get overdone innuendoes, gory close-ups of mutilated bodies, and some really corny soliloquies and melodramatic emotional outbursts that seem more suited to an Off Off Broadway play.

It's a good thing Captain Jack is so cute, and Gwen so kick-ass.