American Idol: Haley Gets Zeppelin's Blessing; Doesn't Let a Fall Get Her Down 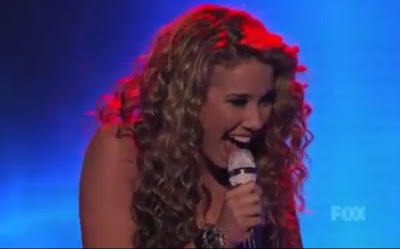 Haley Reinhart had a tough time on American Idol Top 3 performance night. Saddled with the night's toughest songs and questionable arrangements, she nonetheless stole the show with what mentor Beyonce dubbed a "ballsy" move--to sing Led Zeppelin's "What Is and What Should Never Be." While Haley's performed Zeppelin before with her family band, the real motivator behind choosing the song was that Jimmy Page and Robert Plant offered their songs to her--after hearing her sing "The House of the Rising Sun." How can a gal say no to that?

Of course, in true American-Idol-hates-Haley fashion, there was no mention of the band giving up their catalog to the young singer. If it had been James, you know they would have done a whole segment on it--James, who even got his Top 4 homecoming shown on performance night. 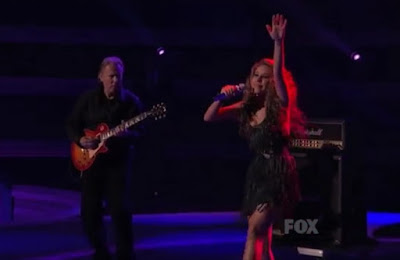 Haley started the Zeppelin tune at the top of the stairs, peeking out over swinging doors before stepping through them. The audience collectively held its breath as she sauntered down the infinite length of stairs, and exhaled a sigh of relief as she made it confidently and safely. Haley sang her heart out through the complicated shifts in the song's tone, and did a quick rocker turn around the judges' table--before falling back up the two stairs in front of them.

Haley's dad, who was playing guitar with her, shifted forward out of reflex, but kept playing. Haley got herself up, barely missing a beat, delivering the next line to the audience with a smile and earning a whoop from them and the judges. As you see above, she launched into her trademark one-arm "sing it!" wave, which doubled as an "I'm okay!" acknowledgment. 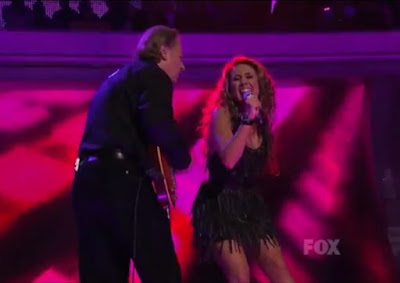 Haley looked amazing, jammed with her dad, and just had an amazing time up there. She did Zeppelin proud, and I hope they liked her version, because I thought it was a damn good tribute to their song and style. You can watch her entire performance here:

Check out my full review: "Ranking the American Idol Top 3: Who's 'In It To Win It'?"


PHOTOS: Haley Reinhart singing Led Zeppelin's "What Is and What Should Never Be," with her dad on guitar, American Idol Top 3 performance night. Screencaps c2011 FOX.
Posted by Valerie David at 12:20 PM 2 comments: Links to this post 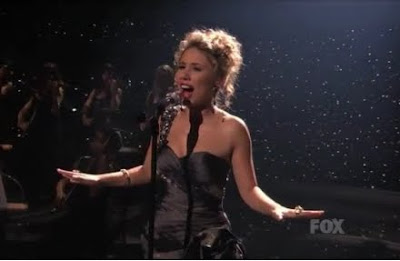 There's a good possibility that Haley Reinhart will go home on American Idol Top 4 results night, and it will be one of AI's biggest crimes if that happens. While the Lady Reinhart has not always been perfect, she's had about four performances now ("Bennie and the Jets," "Rolling in the Deep," "The House of the Rising Sun," and last night's "I (Who Have Nothing)," that have blown the competition out of the water. Lady Gaga was beside herself with glee last night during Haley's mentoring session, announcing, "You're going to kick so much ass!"

Haley has also gotten backing from other musicians, including American Idol alums like Adam Lambert, who last night tweeted: "Haley gets criticized cuz she's the best and SO not cookie cutter. She was Fiesty 2n b/c she's a strong, smart woman. my fav kind o woman," and David Cook, who tweeted "Catching up on tonight's idol. These judges are getting somewhat infuriating."

It's probably not best for Haley to win, since the powers-that-be would probably give her the Kris Allen treatment and punish her with artistic and promotional apathy for not being their favorite. She does, however, deserve to be in the American Idol Top 3. She's grown the most in this competition, with probably James as a close second in that department--though he's faltered a bit of late.

As unfair as the judges have been to Haley, they've also been unfair to the other contestants, who are constantly told that they're awesome and never given any valid criticism. So they keep making the same mistakes, only to be occasionally given some revisionist critique from the judges about how they "didn't do so well last week"--which only serves to confuse them further. All four contestants in this race are talented, and they've all been ill-served by the Idol machine, which is unfortunate. It would have been nice to see these kids really go head to head, at their best, without all the ridiculous producer manipulation and sabotaging of Haley (and honestly, I think they sabotaged Jacob near the end of his run as well--and I wasn't even a fan of his.)

You can also find all of my American Idol recap links here on the TV News and Reviews blog.


PHOTO: Haley Reinhart performing "I (Who Have Nothing)" on American Idol Top 4 night. Screencaps c2011, FOX.
Posted by Valerie David at 1:09 PM No comments: Links to this post