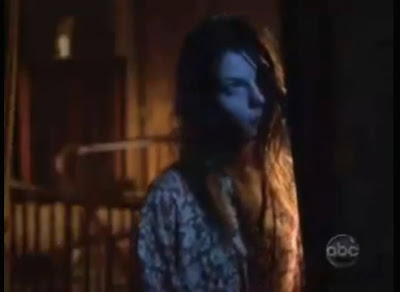 Happy Town newcomer Henley wonders
what's up on the mysterious 3rd floor.
New ABC mystery series Happy Town premieres tonight with its pilot episode, "In This Home on Ice". While ABC is hoping for a combo of Lost and Twin Peaks fans, it remains to be seen if this uneven but intriguing series can hold that kind of audience. With a large cast of quirky and mysterious characters, and a continuing storyline of teases and shocks, Happy Town could turn into a decent mid-week guilty pleasure.

The lows? A jarring beginning of violence and Stupid Character Acts, and some corny and lame dialogue. There's also a problem with tone, as some actors seem to be playing up the cheese factor and melodrama, while others are playing it as serious, straight drama. It's not an easy line to straddle, and the success of Happy Town will depend on whether it can get everyone reading from the same script.

Want more detail? You can read my full Happy Town review at AC.


PHOTO: Happy Town pilot, "In This Home on Ice" screencap, c2010 ABC Studios.
Posted by Valerie David at 1:15 PM No comments: Links to this post 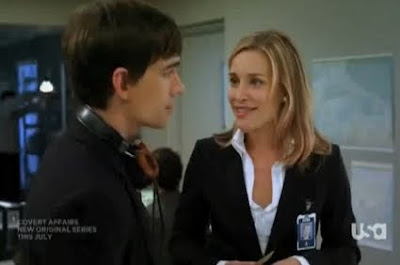 USA is rolling out new series for the summer, including CIA drama/comedy Covert Affairs. Hoping to repeat the success of quirky spy intrigue shows Burn Notice and White Collar, USA will add Covert Affairs to the line-up this July. Piper Perabo stars as a newly minted CIA field agent, and Christopher Gorham (Ugly Betty, Out of Practice) costars as a blind ops tech who acts as her guide (yes, you read that right). Early buzz is positive--you can check out my full review and cast list on Covert Affairs at AC.

You can also see the trailer right here:

After her role as a sexy but angsty lesbian teen in Lost & Delirious, and a singing, dancing bar girl in Coyote Ugly, I'd always expected the pouty-lipped Piper Perabo to have a bigger career. She's been working steadily, but perhaps this might be a new break-out role for her. I'll post updates as soon as we get an actual start date for Covert Affairs.

P.S. Keep an eye out for Mohinder--Heroes star Sendil Ramamurthy is also joining the cast of Covert Affairs.

Posted by Valerie David at 6:09 PM No comments: Links to this post 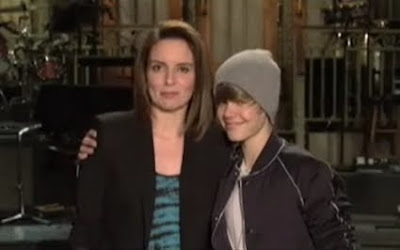 Ohnoshedinnit...ohyesshedid! Saturday Night Live went there tonight with host Tina Fey and musical guest Justin Bieber. Sixteen-year-old Justin took part in the monologue and some sketches--including one where he played the tempting student to Tina's lonely teacher. Tina fantasizes about her student, where he serenades her with song.

This was funny (and dangerous) enough in concept, but even funnier were the lyrics he sang about helping her with her back pillow and watching her "skip the hard parts" in her Pilates routine. Justin seems to be enjoying the whole Cougar lover persona he's been cultivating and he played his part hilariously, tossing his perfectly layered hair as Tina's teacher dreamed about how his hair "always knows just where it's going".

Tina was hilarious with her usual deadpan delivery of the lines, but she didn't sell it quite as well as she could have. As you can see below, in the backstage clip of shooting the Saturday Night Live promos, Tina seemed very conscious of not showing the least amount of attention that could be construed as worthy of a felony. Justin's no fool, however; in the promos and on air, he managed to squeeze in as many hugs as he could get.

Considering the whole Saturday Night Live sketch was about forbidden love, it would have been fun to see Tina play up the dirty old lady role a bit more indulgently. After all, there was no physical contact and the kid's not going to be harmed by a wink and a smile. Check out his adorable flirtatiousness on Chelsea Lately for the perfect example of Cougar comedy:

As for Bieber's musical performances on Saturday Night Live, I was impressed. I know kid artists like Miley Cyrus and Justin Bieber get a lot of criticism in the press for not being "real" artists. If you've been watching American Idol this season, you'd know that a lot of the adult artists can't sing a note, can't play an instrument, and can't write songs. Whether you like his brand of youthful pop/R&B or not, you've got to give the kid credit for being so young and putting on such a professional style show, for his songwriting, for having a sweet voice, and for having pretty fly dancing skills--and a ridiculously charming personality.

I always say that anyone that sounds good on Saturday Night Live will sound amazing anywhere else--even the best bands notoriously sound like crap on that SNL stage. While he had a few rough spots vocally, overall Justin put on a good show. His singing during the Tina Fey teacher sketch sounded live--and if it was, he really has mad singing skillz.

Justin also slipped in a little love note later in the show, changing his song lyrics at the end from "When she smiles, I smile" to "When Tina smiles, I smile." And then he gave that adorable grin that inspires mature women to think very wrong thoughts.

Two years, ladies, and then you can think them all you want. Until then, stick to the wink and a smile.

Lost -- "Happily Ever After" Review and Screencaps 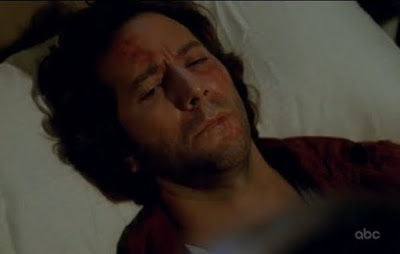 Desmond wakes up to a nightmare, in Lost "Happily Ever After".


*SPOILER ALERT* Tonight's Lost, "Happily Ever After", brought the show back around to the mystery and heebie jeebies we've come to love. We got more Desmond/Penny love and crazy Charlie as a bonus, which just added to the goodness of this tight and compelling episode. 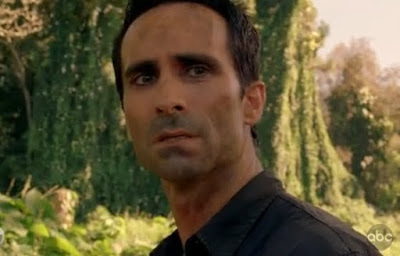 I confess, when Lost episode "Ab Aeterno" aired, I was pretty disappointed. After the anticipation of a Richard Alpert-centric episode, I was let down by a story took the gorgeous and immortal Eyeliner Man and stripped away all his mystery. While it was nice to see the sensitive side of Richard and his truly eternal love for his bride, the fact that Richard was only special out of making a deal with the devil took away from his sexy mystique. This is one of the pitfalls of stretching out a one year series this long--the build-up is sometimes too much for the resolution you originally had planned. 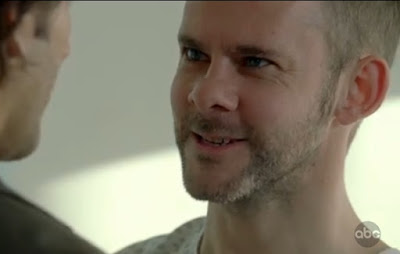 With "The Package" and especially tonight's "Happily Ever After", however, Lost is back on track to muddling our brains. While we've seen hints before that the alternate timeline Losties have occasional flashbacks or deja vu to their original Island lives, tonight we got confirmation that the two are definitely connected. After Desmond has a run-in with crazy, seemingly suicidal Charlie and a terrifying car ride off of a short pier into the ocean, Desmond gets a flash of the pivotal "Not Penny's boat" moment from his previous life. 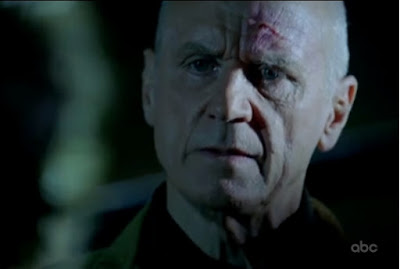 We've seen a lot of "what if" scenarios for our Lost castaways, including an awesome hotel seduction scene between Sun and Jin, but tonight's set-up may be one of the most shocking. We get Desmond working for Widmore, as his respected right hand man. Widmore is married to Eloise, and their son Daniel Faraday is a classical musician hoping to perform some rock/classical with Charlie's band Drive Shaft. Then there's Daniel's half-sister Penny, whom Desmond has not even met--but the ever-tuned-in-to-weirdness Daniel points out that Desmond may need to discover his other life and have his love-at-first-sight moment with Penny. 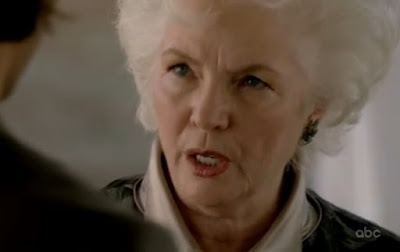 The most telling moment is when Eloise confronts Desmond about his inconvenient digging into these strange blips in reality. She hints that the Losties' alternate lives may be wish fulfillment of a sort--she tells Desmond he has what he wants, which is Widmore's respect. She tells Desmond he's not "ready" to find out anything about the facts he's pursuing. The headstrong Desmond ignores her, with a little help from Daniel, of course. 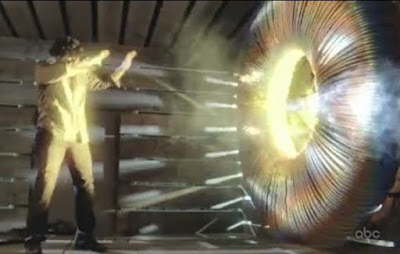 There's also the ongoing Lost mystery of what Widmore has planned in our familiar timeline, where he's brought Desmond back to the island to prove he can withstand an electro-magnetic catastrophe. Which he can. But what does this have to do with the Man in Black, Jacob, and Widmore's kidnapping of Jin? And can Desmond trust Sayid as his savior from Widmore's clutches? Can Desmond tell the future still? 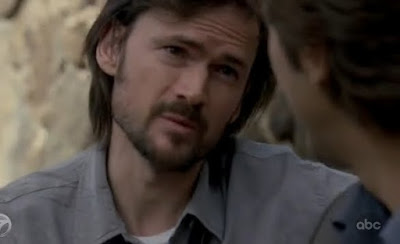 And did Daniel's plan to detonate the nuclear bomb trigger the alternate reality? And did his mother Eloise have that result in mind from the beginning? Who exactly is pulling the strings in the Lost universe...or is their more than one puppeteer?

Things are getting interesting again. 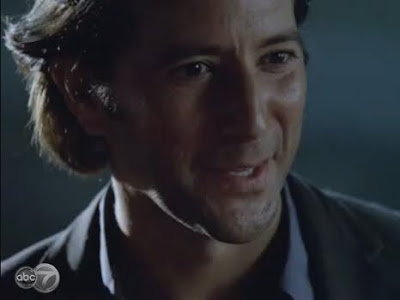 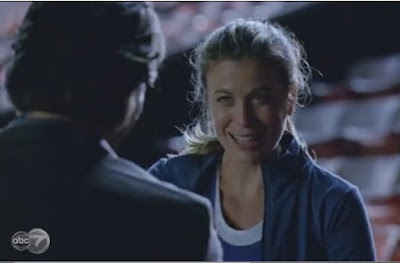