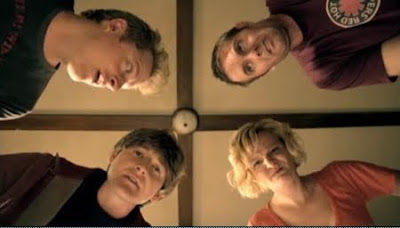 Yeah, I'm not sure about Raising Hope. I suspect I'm not the target audience for FOX comedies. I'll be honest--I only tuned in to watch because there was nothing else on that I wanted to watch, and I LOVE Martha Plimpton.

When I first saw ads online for Raising Hope, I actually thought Martha Plimpton was going to be the mother of baby Hope. I was a bit taken aback that the 40 year old Plimpton was actually playing the mother of the very very grown-up Jimmy (Lucas Neff)--until they explained she'd been 15 when she gave birth to him.

I can't really imagine the writing room that came up with Raising Hope. It's part Rosanne/The Middle lower class family drama and part absurdist comedy from Planet WTF? Jimmy is driving down the street and picks up a screaming woman who's being chased down the street by an angry man. Grateful for her rescue, the woman promptly has sex with Jimmy in the van. The next morning, the family is enamored with Jimmy's new girlfriend--until they discover she's a murderous fugitive. Then Mama Chance hits her over the head with a TV and they turn her into the police.

Hilarious, right? It gets better. Jimmy visits murderer girl in prison and finds out she's pregnant with his child. He brings the baby to her execution--but don't worry, he covers the baby's eyes as its mother is electrocuted. Are you rolling on the floor yet?

I was ready to write off Raising Hope as Not For Me, but the second half picked up. Neff brings sweet charm to the hapless Jimmy, who has some warm and funny scenes with a grocery store clerk played by Shannon Woodward. Plimpton also brings her excellent wry delivery and comic timing to scenes with the baby and Neff, and there's actually a really sweet moment when Mom and Dad Chance sing 70s tunes to baby Hope to quiet her.

(I suspect there are also quite a few people out there who appreciated the nostaligic humor of riding in cars as a kid--in the days before you were supposed to be strapped in like an astronaut--and avoiding the rusted hole in the floor. Good times.)

The sweet and charming moments in Raising Hope, and the truly funny slapstick, make it all the more jarring when the show veers into gross-out or whack job territory. It doesn't need to try so hard to be "kooky" or "wild". A scene involving vomiting was actually funny--when it happened off screen. Once it actually hit the screen, it ceased to be funny.

On the strength of Neff and Plimpton, I may give Raising Hope the two episode test to decide if it's worth pursuing. On the other hand, the new show Running Wilde with Will Arnett and Keri Russell couldn't even get me to the opening credits--or Keri Russell. After a few minutes of watching Will Arnett in painfully awkward and "look how funny we are!" scenes, including some weird photoshop disaster, I had to turn it off. Maybe there was something entertaining farther along, but I just couldn't wait.