Kim Kardashian Is Not a Pedophile; Justin Bieber Is a Flirt 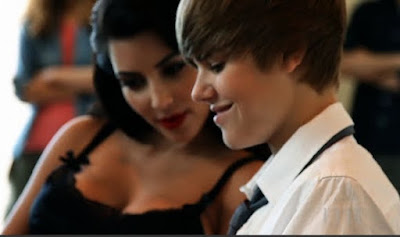 Kim Kardashian and Justin Bieber work together on the set of their Elle photoshoot.

Never in a million years did I think I'd be defending reality star, famous-for-being-famous, Kim Kardashian. But the latest uproar over her Elle photoshoot and mild flirtations with 16 year old Justin Bieber have gotten completely out of hand. Besides making a mountain out of a molehill, the world apparently still thinks that older men/younger women is hot, and younger men/older women is "gross".

It's always amazing to me how thoroughly people can live with blinders on, never paying attention to those teenage female models in sexy photoshoots and young girls in films with men decades older than them--but the moment Demi Moore ogles a man 15 years her junior, all hell breaks loose.

Now we have Kim Kardashian, a 29 year old who's being called a "cougar" at best, and pedophile at worst. All this for basically standing in the proximity of a teenager and not acting like a nun. Perhaps we can forgive the insulting tweets from hormonal teens and crazy pre-teens, but the rest of the world definitely needs to grow up.

Want all the scoop on the Justin Bieber and Kim Kardashian "courtship"? Want to know what Chelsea Handler thinks about her boy Bieber's "betrayal"? You can check out the full story in "Kim Kardashian Is Not a Pedophile; Justin Bieber Is a Flirt."
PHOTO: Screencap from behind the scenes video of the Elle photoshoot, c2010 Elle.com.