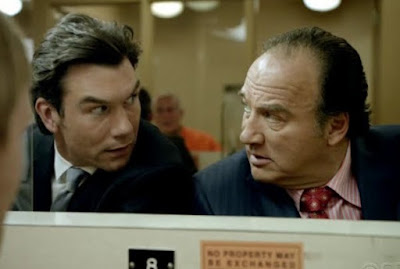 I have to say, I liked the pilot of The Defenders more than I thought I would. This Jim Belushi/Jerry O'Connell buddy lawyer show was feisty and fun, and smarter than expected. There are wisecracks and testosterone-y posturing, but the court case was handled seriously, with some good detective work by Morelli (Belushi) and lawyer newbie Lisa Tyler (Jurnee Smollett). It's nowhere near as wacky as Boston Legal, but it finds a similar balance between drama and comedy that's enjoyable.

Belushi is great here, with a combo of seasoned, smartass Vegas lawyer and broken-hearted man devastated by an impending divorce. Jerry O'Connell once again finds a way to make being a sleazy arrogant jerk somehow adorably charming. The two have a good rapport, and it'll be fun to watch the bromance develop on The Defenders as they work through cases and personal issues together.

Jurnee Smollett (Friday Night Lights) is also likable in The Defenders, though her role felt a little underdeveloped. O'Connell's scenes with her felt like he was doing a drive-by on the way to getting back to the good stuff with Belushi, and I'm hoping that changes.

For the other women characters on The Defenders, we have 80s-eyeshadowed receptionist Zoe (Tanya Fischer, who you may remember as free spirit Windy on the excellent Life on Mars). Zoe is a bit flaky and hands everyone their messages on heart-shaped post-it-notes, but she's got it together--enough to even scam the wily Kaczmarek (O'Connell) out of hard-to-get show tickets.

Kaczmarek also has a hate/sex relationship with D.A. Meredith Cramer (Natalie Zea), which was the weakest aspect of the show. Cramer is a cliche hardass woman character, a Barbie doll lawywer with vacant eyes, and so thin she looks like she might break in half. The only plus for this male-centric show is that she's at least not a teenager, but they're going to have to make Cramer a lot more interesting for me to accept this part of The Defenders plot.

All in all, The Defenders is definitely worth pursuing if the pilot is indicative of the rest of the series. It looks like it might be a nice breezy antidote to the rougher, gorier procedurals that are the norm these days. If Smollett gets more action, the bromance flourishes, and the court cases stay sharp, this will be a fun mid-week guilty pleasure.

Watch The Defenders on CBS, Wednesdays at 10/9c.