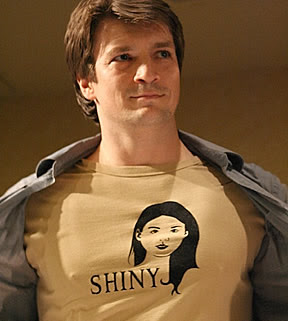 Comic-Con 2010 is going on right now in San Diego, a bonanza of geek girl and boy goodness no matter what genre you love. Checking out the schedule of offerings on the official Comic-Con International site is awe-inspiring. There are comic artist and writer panels, movie and TV series previews and Q&A sessions, artist spotlights, art tutorials, fanfiction forums, and plenty of geek fandom worship everywhere.

And there are lots of hot guys. Sure, girls can geek on fantasy plots, sci-fi glitches in logic, and thematic issues in manga, but just like the boys love Princess Leia in her slave girl outfit, geek girls love the handsome (and often buff) boy stars that turn up to pimp their latest and/or greatest works.

Nathan Fillion, of beloved Firefly and Serenity fame, is a favorite at Comic-Con. This year he's promoting crazy comic hero film Super as well as his current hit series Castle. The Comic-Con also has plenty of other hot boys whose characters include gladiators, powerful wizards, white collar criminals, male prostitutes, and of course, loads of vampires. Yum. You can read about the best of the best in full detail, in Hottest Guys, Hottest Panels at Comic-Con 2010.

Posted by Valerie David at 4:43 PM