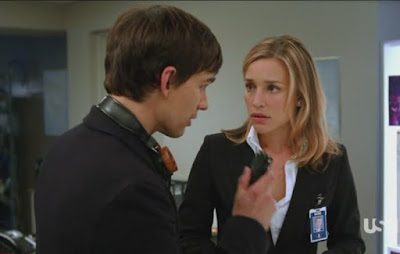 Annie (Piper Perabo) and Auggie (Christopher Goram) discuss her mission
in the Covert Affairs pilot.
If you're considering whether to watch USA's new show Covert Affairs tonight, go ahead and make the leap. If the pilot is an indicator of future episodes, Covert Affairs looks to be an entertaining and sassy addition to the USA line-up of hits.

One of the big things that USA does right on their shows is the dialogue. My fave USA shows, including Burn Notice and White Collar, have a goofy charm but also snappy sarcastic conversation. These characters are not only fun to be with, they're smart. The reason the yin/yang of White Collar works so brilliantly is that Peter and Neal are each clever in their own way. Neal is sneaky, but Peter isn't a cliched bumbling FBI pursuer--he caught Neal (twice) because he's just as quick on the uptake.

This is the sort of trend I hoped would continue with Covert Affairs. There's a good chance a majority of the male viewers are tuning in for lead actress Piper Perabo's gorgeous porn star lips, but I think even they would prefer a good show over a bad one. Thankfully, an early scene in the Covert Affairs pilot showed instant promise: When Piper's CIA trainee character Annie Walker is immediately schmoozed at headquarters by CIA stud Conrad Sheehan (Eric Lively), she asks him if he typically hangs out at the front door to "chat up girls on their first day?" Conrad smoothly replies, "Absolutely. I'm both lazy and predatory." Bazinga. 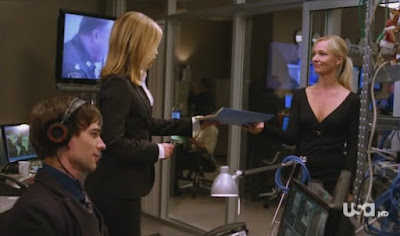 Things improve from there. Perabo gets hooked up with tech genius Auggie Anderson (Ugly Betty's Christopher Gorham), her literally blind guide to the CIA. Gorham brings buckets of charm to the role, as the steady and practical balance to Annie's impulsiveness. He's also a bit of a rake, as the romance novels would call him, using his blindness as the best pick-up strategy ever.

Though her role was fairly ridiculous in short-lived series Studio 60 on the Sunset Strip, I was riveted by Kari Matchett's performance in it. She just commands attention on the screen, with her sexy confidence and sultry voice. Here she's Annie's boss (see pic above), Joan Campbell, a determined woman who appears emotionless and in perfect control in her job. Things in her personal life are a bit more complicated and irrational, however. 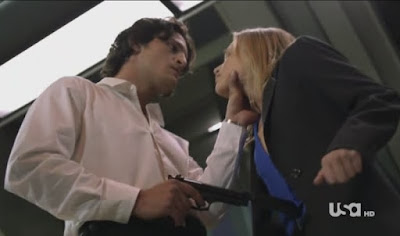 While doe-eyed Perabo doesn't completely sell me on the tough CIA girl personality, she's plenty likable and is refreshingly convincing in the action sequences. I like that her fight with an assassin is rough and tumble, and she's realistically losing for most of it. She gets by with some self defense techniques, rapid movements and quick thinking, but Covert Affairs gets it right when she loses out to the sheer strength of her opponent. Though she should be in the hospital at the end of the scene instead of wincing from a slight bump on the head, at least she doesn't leap up three feet to punch a guy--and miraculously knock him unconscious--ala Holly Hunter's 80 lb. character on Saving Grace.

The Covert Affairs pilot delivers on action, fun, humor, sexiness, and intrique. There were a few mysteries I thought were telegraphed too obviously, but a couple twists did take me by surprise. The clever dialogue from all of the characters was the best revelation, and Covert Affairs boasts a talented cast that should be skilled enough to make up for any plot holes or silliness.

The most common comparison reviewers are making to Covert Affairs is Jennifer Garner's Alias. While I did love the latter show in the beginning, the hooker costumes and wigs and convoluted plot just got too cartoonish after awhile. Where Covert Affairs has the edge is that we already expect it to be a bit cartoonish, so all the focus on sexy costumes and flirting between missions isn't quite so jarring.

Watch Covert Affairs Tuesday nights on USA at 10/9c, and see for yourself!