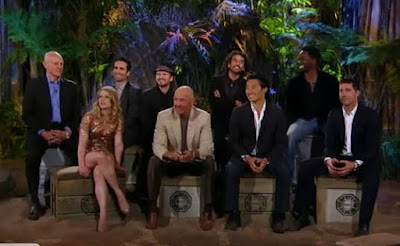 Tonight on Jimmy Kimmel Live, we got a last chance to see some of our favorite Lost castaways (above pictured). While it was mostly good-natured chatting and cracking jokes, and some awkward moments, Jimmy did manage to have a Q&A with Matthew Fox at the start of the show about the Lost mythology.

It was an interesting theory Jimmy presented, about the idea of having to pass a test of character before concluding your life--and that Jack passed that test. Jimmy also conjectured that the Lost story was really about Jack's test, and that the others were merely players in that storyline--though they were experiencing tests of their own. I guess you could say that they all experienced tests of character, but perhaps the people who lived at the end still had their real tests yet to come.

The ads for the Jimmy Kimmel Live, Lost finale episode promised 3 alternate endings that Cuse and Lindeloff had planned. I was momentarily excited at the prospect of seeing what possibly better solutions they had tried out, but then I realized it was Jimmy Kimmel Live and these would most likely be joke set-ups.

The three clips had the actual Lost actors performing different finales--which turned out to mirror other famous season and series finale episodes. After each flub, the writers maintained that they hadn't seen the originals so they didn't realize they were the same. The first was a Survivor episode where Sayid was dismayed to learn that he'd been voted off the Island. Naveen Andrews was hilarious as he had his exit confessional where he complained bitterly about being killed, blown up, etc., only to be "kicked off the @#$%! Island".

(Article continues below these limited edition bobbleheads--click each pic for more info!)

The second Lost sketch involved Richard, Hurley (Jorge Garcia), Claire, & Jack in what was apparently a mirror of the Sopranos finale. Like Cuse and Lindeloff, I haven't seen it, so I can't tell you if it was funny or not. The third and final "alternate Lost ending" was the finest, with Bob Newhart waking up in bed with Kate, ala the series end of Newhart. Bob was peeved that Bob and Carlton hadn't seen his beloved series finale either.

For another startling reunion, Sawyer appeared on the big screen TV, live from Canada, where he was shooting Snakes on a Plane 2: Electric Boogaloo. This was funny enough in and of itself, but Josh Holloway actually did some fly break-dancing moves with the original Breakin' movie duo Adolfo 'Shabba-Doo' Quinones and Michael 'Boogaloo Shrimp' Chambers. Ten points for an awesomely outrageous 80s reference and ten more points for execution.

Jimmy also had random people staring out from the jungle foliage surrounding the set of sand and airline debris--the funniest was a boy who may have been, and certainly looked like, the young Jacob.

My only complaint about the show is at least partically the fault of the Lost writing itself--there was only one woman, Emilie de Ravin, on the show. I felt moderately better when Evangeline Lilly at least showed up in the Bob Newhart sketch. What about Yunjim Kim (Sun)? Elizabeth Mitchell (Juliet)? Maggie Grace (Shannon)? L. Scott Caldwell (Rose)? Tania Raymonde (Rousseau)? I hope they were all busy and that it wasn't just male-centric planning by former Man Show host Jimmy Kimmel. Despite the appealing cast diversity on Lost, however, you have to admit it's been largely a male-dominated story arc, relegating all of the women's roles to romance and motherhood.

One of the things I liked best about the Lost cast reunion on Jimmy Kimmel live was that there seemed to be a lot of genuine affection between the cast members. With six years of living and filming on Hawaii, it's nice to know that some friendships were formed, and Michael Emerson, Terry O'Quinn, and Matthew Fox had plenty of nice things to say about each other. I also liked that Naveen Andrews pretty much kissed everyone on the cheek, including a very affectionate kiss for Michael Emerson when the actor said he was happy there didn't seem to be any gleeful satisfaction from his fellow actors when Ben got any of his 100 beatings.