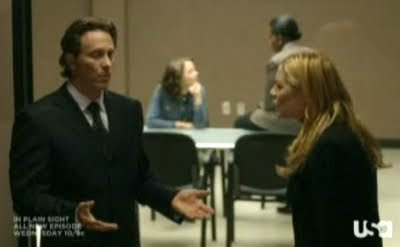 I'm still lamenting the loss of Studio 60 on the Sunset Strip, but at least In Plain Sight has given us another awesome and quick-witted character for Steven Weber to play. Tonight on "Love's Faber Lost", FBI agent Mike Faber (Weber) returns to Albuquerque WITSEC with an important witness--and some ramped up flirtations for Mary.

I wrote at the beginning of the season about the changes at In Plain Sight, and I have to say that thus far I am pleased. Mary still has her rough edges and intimacy issues, but the show is fun again. We're getting intriguing witness stories, and great banter from Mary, Marshall, and Stan--and Faber.

Tonight's In Plain Sight episode, "Love's Faber Lost", centered on Natalie Vickers (Alexandra Lydon), a woman committing real estate scams that involved breaking into foreclosed properties and "selling" them to unsuspecting buyers looking for a deal. Natalie committed these risky acts in order to help her long time boyfriend get out of debt to the Russian mob. When caught in a sting operation, Natalie goes into WITSEC, denies all knowledge of her boyfriend, and keeps running scams with him--for love.

Faber personally requests Mary for the job because Natalie is hugely important to breaking up the Big Picture of mortgage fraud--she can name names of mobsters as well as the bankers who helped them. Mary is suspicious when Natalie seems too easily convinced of adopting a new identity and life. Mary and Faber butt heads when she finds Natalie violating her WITSEC agreement and Faber does his best to cover it up to keep her in the program.

I loved Raphael, but it's clear how much better a guy like Mike Faber is for Mary. Their back-and-forth throughout the show made for one of the best and funniest In Plain Sight episodes in history.

Mike: Maybe she was going alphabetically?

Later Mary says that she protects her witnesses no matter what, but hey, if Natalie leaves the program she doesn't care if she gets "run over by a dump truck". Mike replies that she should put that on a plaque above the door.

When he stops by Mary's house to say goodbye and drop off a present of wine, Mike asks if the thought of seeing him again is "good, terrifying, destined to end in court?" He gets smiles out of Mary when no one else can, and it was fun to see her dodge and parry his advances.

Save 30% on your favorite shows! (Article continues below.)

I wasn't sure how I felt about introducing a new love interest for Mary so soon after her 3 year relationship with Raph, but they seem to be playing it the right way. Mary's not jumping into anything, and the angst/sexual tension/awkwardness is entertaining to watch and stays true to Mary's character. Here's hoping we see more of Faber in the future, though hopefully not at the expense of Marshall. I understand why they sent him off on a WITSEC errand for this episode, but I enjoy his and Mary's rapport too much to forsake it for Faber--awesome as Faber is.

It was an interesting twist, too, as Mary's cynicism ferreted out how much Natalie's boyfriend was manipulating her. It was painful to watch as Natalie realized that the only man she'd ever loved was willing to turn on her in a heartbeat to get himself a deal. Luckily she had Mary on her side, getting her the deal and the boyfriend a jail term and probably a death sentence from the Russian mob. As Mary tells Faber earlier in the episode, however, Mary's constant cynicism is great for her job and a curse for her personal life. Will she ever be able to reconcile the two?

Posted by Valerie David at 2:17 AM