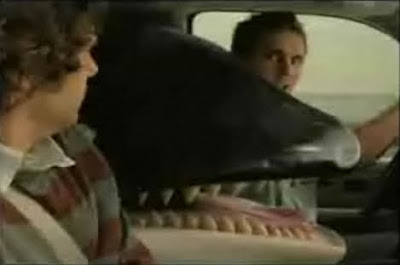 Tonight was a fantastic Super Bowl game, with the underdog New Orleans Saints surprising the hell out of everyone who said the Indianapolis Colts were going to easily win. Sometimes the Super Bowl ads entertain more than the actual game, but this is one year where that was definitely not the case. This was not only because the close score for more than half the game was exciting football, but because the Super Bowl ads just weren't all that overwhelming.

One ad that gets kudos for originality, sight gags, stuntwork, and selling your product well was Bridgestone tires. They put together this little nugget entitled "Killer Whale".

I really really liked this Super Bowl ad for Google, entitled Paris. Maybe it's a mushy girly girl thing, but you still have to give them credit for the idea. Not only is it sweet, fun, with a little bit of mystery, it very quickly and accurately tells you all the cool and informative stuff you can get on Google--from the practical to the silly. Rarely has a simple text ad been so effective.

You can't have a Super Bowl without a Budweiser Clydesdales ad, and they didn't disappoint us this year. While this doesn't measure up to the dalmation training the young horse, it's still really cute and sweet and those Clydesdales are gorgeous as ever.

I'm not normally a fan of the whole male neanderthal vibe of Super Bowl ads, but this Megan Fox Super Bowl ad for Motorola does have some pretty funny stunts in it that were at least worth a laugh. (*Click* pic to see video.)

I like that Coke ads are usually the gentle giant of the ad race, and this funny Super Bowl ad "Sleepwalker" is another example of how to be amusing and entertaining without being offensive. It's also got some awesome effects. (*Click* pic to see video.)

Other honorable mentions are: The Hotel Hell Vacation Super Bowl ad for HomeAway with the Griswolds, the adorable Kia Sorento Super Bowl ad "Joyride", the funny "things men do for women" Dodge Charger Super Bowl ad (particularly that bit about the vampires), and the kickass Robin Hood trailer.

And of course, who can resist Betty White and Abe Vigoda playing football in this Super Bowl ad for Snickers?


ETA: I just want to say that I find it personally annoying that women in their underwear in commercials look like Victoria's Secret models, but when we finally get guys in their underwear? We get pudgy guys in loosey whities. Talk about inequality.