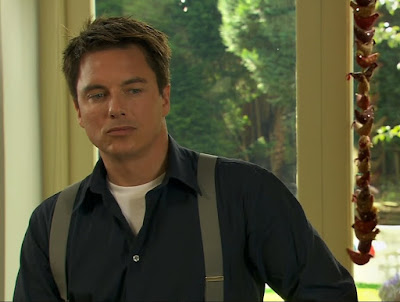 Erm, quoi? The Hollywood Reporter has stated that Russell Davies is working to bring the UK's sci-fi series Torchwood to America. As an American reboot. On Fox. Let me cut off your screams of protest by saying that John Barrowman may star as Captain Jack. Now you perhaps have the same quizzical look I do.

It's not just us. Cinema Blend is just as confused, as it's not clear whether the American version will replace the UK version, or if they'll run simultaneously. The American Torchwood is supposed to give the extra-terrestial "outside-the-gov't" team a more international edge, rather than being so Welsh-centric.

I've just had an idear. If they run both versions simultaneously, it's an idea that could work. Captain Jack could get the American Torchwood team up and running, and then could travel between the two locations, making appearances on both shows. The American version could then be played on its own terms, without diminishing or trying to "remake" the British one. Here's hoping.

The biggest obstacle is Captain Jack himself. Part of the beauty of the character is his wonderfully flirtatious omnisexual behavior--he'll do anyone, regardless of color, gender, or planet of origin. American TV has a tendency to sanitize characters like this, and taking the openness away from Captain Jack will be just as bad as the character assassination Davies already did to Jack in last season's Torchwood episodes.

And I agree with Cinema Blend, the idea of Americanizing Doctor Who? That's just sci-fi blasphemy people. There is no way, NO WAY that would ever fly right. You can do American shows that reference or spin-off of Doctor Who, but you can't mess with the original Time Lord. It just isn't done. Seriously.

I'll post more news on this as I find it.