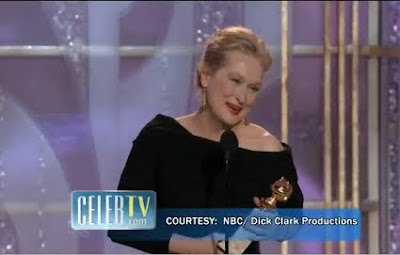 The Golden Globes tonight just wasn't the rowdy, gleeful event that we're used to. This obviously had a lot to do with the tragedy in Haiti being on everyone's minds, with occasional mentions by presenters about donating to the cause or taking part in George Clooney's telethon later this week.

As with all of the charity programs and telethons, it makes for an awkward combination of levity and comedy, leaving everything feeling off kilter or inappropriate. Should we laugh at the jokes? Should we feel guilty if we do?

Meryl Streep had a lovely speech when she won (against herself) for best actress, for her role as Julia Child in Julie and Julia. She humbly spoke of her wonderful career, and how she'd played so many great ladies, she'd begun to be confused for one. She then talked of playing Child, a woman with endless enthusiasm, and how she'd drawn on her mother's sunny disposition for the role. Streep also remembered how her mother would react to attending an awards show at this time: she would say, give to the charity that helps the cause and then put on your nice dress and go.

Sandra Bullock was also very emotional when she won for The Blind Side, and I was so happy to see her get some recognition. It took a different kind of role for her to get it, but that's how the system works. It never seems fair that actors in lighter material who are a joy to watch, with great comedic timing and sweet sincerity, don't win any awards until they're in "serious" dramas.

Hence the beauty of the Golden Globes, which at least separates comedies out from dramas and gives them a chance to win something. The Hangover, the true definition of broad comedy, is never going to win an Oscar against Avatar--but it can win a Golden Globe in the comedy category.

It was also nice to see some of the multiple winners staying in their seats while deserving newcomers to the Golden Globe categories got their props. I was extremely excited to see Julianna Marguiles win for The Good Wife, an interesting and intelligent show with multiple female characters that have actual depth. Marguiles got in one of the night's many jabs at NBC, when she thanked CBS for having faith in the "10 o'clock drama".

Ricky Gervais also poked at NBC, saying he wasn't used to performing in front of so many people--and neither was the network. He added that if he didn't do well they were going to replace him with Jay Leno. While Gervais had some funny lines, with jabs at Angelina Jolie, Colin Farrell, and Mel Gibson amongst others, I have to admit his hosting was a little disappointing. I can't point to anything particularly wrong, except that he seemed to be going for safer jokes more often than his usual biting wit. It may well be that the overall somber mood of the crowd wasn't as conducive to his irreverent style, though his meaner stuff did still get plenty of laughs. He may also be better at shooting from the hip than he is when he labors over his jokes.

There were a lot of fashion highlights on the Golden Globes--it was big time Hollywood glamour with shapely dresses with cut-outs and draping skirts and ruffles and beading galore. Both Sandra Bullock and Chloe Sevigny looked stunning, until one of the ushers tripped over the train of Chloe's dress, that is. Whoops! I also loved the pairing of Cher and Christina Aguilera as presenters, Cher in a sweeping black number with lace on one side of the bodice, and Christina in a strapless shimmery white dress. The contrast of their gowns and their heights was striking, and they both looked elegant and played off of each other well.

While the gowns were lovely, however, it would be so much better if more of the actresses had some body weight to fill them out. The utter skeletal frames of many of the women present was actually shocking at times--Cameron Diaz actually had sunken lines in her cheeks, she's so gaunt. I know it may be fruitless, but I'm not going to stop writing about this every chance I get. It has gone too far. Being mere skin and bones is not healthy, and it's not attractive. Women should be allowed to eat and still be considered beautiful.

For more on the Golden Globes, check out the great and thorough round-ups on Yahoo! and NPR.


PHOTO: Meryl Streep accepting her best actress award at the 2010 Golden Globes, c2010 NBC, courtesy of CelebTV.com.
Posted by Valerie David at 12:27 AM