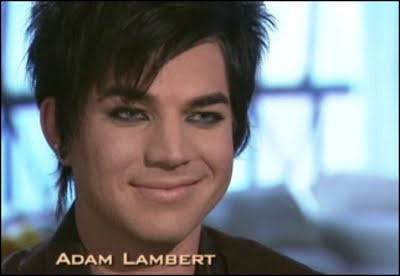 Tonight ABC aired the Barbara Walters special The 10 Most Fascinating People of 2009. With intriguing personalities like Adam Lambert and Lady Gaga, and political figures Michelle Obama and Sarah Palin, the special easily could have been 2 hours. As it was, each person was limited to mere sound bytes, though Walters is fairly good at giving us unexpected peeks into people's psyches with her strategically placed questions.

I personally loved Walters' and Adam Lambert's conversation about his overtly sexual displays at the AMAs. Lambert's pop performance, which included passionate kissing of both boys and girls, a simulated sex act, and an aura of S&M, was considered too racy to even be shown unedited on Walters' show. His NC-17 antics shocked audiences and caused an uproar in the press. Good Morning America canceled his scheduled performance, considering him too hot to handle.

I assumed Lambert's performance was completely staged and planned to be outrageous, just like shock pop princess predecessor Madonna. But as the AMAs performance was censored for the west coast feed, many questioned why no one knew what he was up to beforehand--after all, they do rehearse everything ahead of time.

Lambert's response to his sexual free-for-all? "Adrenaline." With a sweet smile and sparkling eyes, Lambert confessed "I got excited," indicating that much of his passion rose out of the moment, rather than being designed as part of the spectacle. Which, if true, makes him a lot more charming. Though certainly Lambert has always aimed to push the envelope, the idea that he may have pushed it farther because he was so wound up in the action on stage is a lot more endearing than the thought of him just going through the motions to get a reaction. And the fact that it was impromptu definitely goes along with the idea that the AMAs didn't get the performance it had been expecting. Impulse or strategy? You decide. 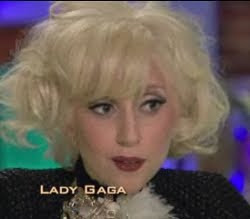 No stranger to shocking antics, the soft-spoken Lady Gaga proved to be a surprise to Barbara Walters. Walters may have been under the same impression as Gaga's father, who she confessed thought she was mentally ill the first time he saw her perform. Thankfully Gaga and her family are on the same page now, and apparently understand her mix of music, dance, and performance art that have made her prominently stand out from the crowd.

Like Lambert, Gaga seemed intent to prove purer motives than are usually attributed to her. She said she wanted to be a role model for young kids, to help them feel that it's okay to be their own person. She wanted them to avoid feeling like a freak, the way she did in school. I'm sure there are a lot of people who still find Lady Gaga freaky, but she is very popular and successful, and there are plenty of people who appreciate her self-expression.

Pop music has gone through a long stretch of homogeneous Barbie types, so Lady Gaga's and Adam Lambert's more unusual qualities are definitely refreshing. And if they tilt the world landscape a little more towards acceptance, and allow kids to fly their freak flags proudly, then that certainly can't be a bad thing.

Watch a taste of the Barbara Walters special on the ABC site.


PHOTOS: Barbara Walters Presents: The 10 Most Fascinating People of 2009, screencaps c2009 ABC News, ABC.
Posted by Valerie David at 11:55 PM No comments: Links to this post 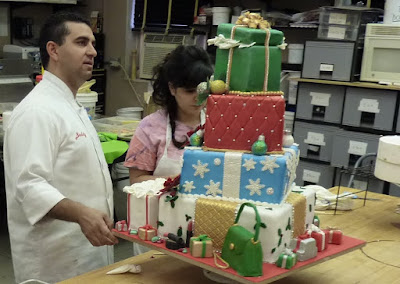 
Buddy and the Cake Boss crew were back tonight with holiday larks, laughs, and large, lavish cakes. At the start of "Colorful Characters & Christmas Costumes", Buddy has a consultation with larger than life drag queen Miss Richmond, whose putting on a holiday show and needs a cake she can jump out of. It's a priceless scene as the usual gregarious Buddy gets overwhelmed by Miss Richmond's squeals and squees and non-stop chatter.

Buddy shares the wealth by bringing the even more alarmed Mauro down to help him "take measurements" to make sure they create a cake large enough. It's clear Buddy just brought Mauro down to watch him squirm, and everyone has a laugh as Miss Richmond goes ga-ga for Mauro.


The Cake Boss crew also has a bit of fun when they build the frame for the cake, and nominate Frankie to stand in it to check the size. They put the frame over his head as he stands there, and it's going fine until, as Buddy tells us in voiceover "it gets stuck on his butt!" The whole crew, including Frankie, howls with laughter as he stands there, stuck with a cake box as a tutu.

The frame is remade, and the scrumptious vanilla, fudge, and strawberry cake is piled up to create a tower. Buddy adds rice crispie at the top for sturdiness, in case Miss Richmond leans on the cake when she breaks out the top.

Buddy and a few of his Cake Boss crew bring the cake to Miss Richmond's show, but the cake is too large to fit inside. Miss Richmond has a split second panic attack (and we get to see Buddy's hilarious impression of this later), but then quickly recovers herself and orders her manager to bring the whole audience outside.

As Miss Richmond shimmies into the cake and the boys bring down the lid, Buddy asks "Is it straight?" We hear Miss Richmond's muffled droll reply "I wouldn't say that." There's a small pause, and then all the Cake Boss boys burst out laughing as they get the joke.

The small crowd gathers, Miss Richmond stands up out the top of the cake wearing her Christmas tree costume, and the crowd goes wild. They love it, especially when she leans over and plants a big kiss on Mauro's forehead, leaving a giant lip print there. Everyone's happy, it's a huge success, and Buddy tells us that it probably turned out better than if they'd actually gotten the cake on the stage.

For the second cake of the show, Buddy and the Cake Boss crew put together a gorgeous girly-girl cake for a bunch of young women's holiday party. Delivery boys Anthony and Stretch drool over the two girls who show up for the consultation, and Buddy chastises the boys later as they beg to be allowed to deliver the cake.

Buddy stacks up the beautiful layers of the square cake, then puts the Cake Boss girls to work adding bling--pearls and jewels, a gold shoe, make-up, presents, gift bags, and more. It's a multi-colored, shining, boutique beauty, and the crew is thrilled with the result. They're even more thrilled with the idea of playing a prank on Anthony and Stretch--so Buddy tells the boys they can deliver the cake as long as they dress up as Elves. Before you can say "Fifth Avenue hotties", Anthony and stretch are wearing green tights and pointy hats and dancing a jig.

While Buddy tells us that some girls might like elves (and we do), the boys are running around town in elf costumes, carrying a cake, and trying to find the right address. They finally get to the party, and the gorgeous cake overshadows their male charms at first. The girls gush endlessly over all the cute and meticulous details of the Cake Boss specialty, and so Anthony finally decides to speak up and tell the story of how they wore the elf costumes just to get to see the girls. Then the boys ask for their numbers. Classy guys, classy. Nice and subtle. I'm not so sure the girls were into these elves, but you never know.

As a last crowning glory to the episode, the Cake Boss crew voted which of the "pretty men" would look best as a drag queen for the day. Whoever won got to strut their stuff down in the bakery for the day. As they showed the pics of all the guys, I kept thinking Buddy's brother-in-law Joe was the prettiest--and yep, he won the prize. He made a pretty nice looking woman, with great legs (turns out he's a firefighter as well as a baker, so he's in great shape)!

The Cake Boss crew were snorting and giggling as Joey handed out cookies to the shocked and amused customers, telling people "I lost a bet" and "Hurry up, these shoes are killing me." Once again, Cake Boss entertains us with both the incredible skill of the bakers and the joy of their good-natured goofing off. After a few episodes of too much yelling and engineered drama, it was great to see the Cake Boss I love back to its friendly ways.

Watch Cake Boss on TLC, Monday nights at 9/8c. Check your local listings for encore episodes and repeats of the series.

Posted by Valerie David at 11:24 PM No comments: Links to this post