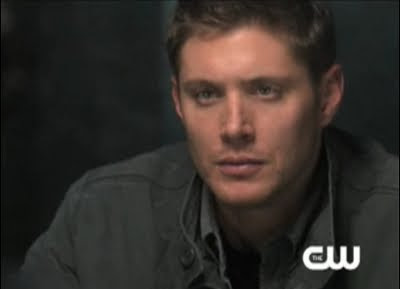 Supernatural takes a little Halloween break from the Apocalypse storyline to bring us a little Benjamin Button-esque age play with "The Curious Case of Dean Winchester". The boys and Bobby discover a 900 year old witch who plays poker--not for money, but for years. Win, and you're 25 years younger. Lose, and you're 25 years older. Or more.

Guess what--mostly everyone loses. The witch Patrick (charmingly played by Hal Ozsan) is pretty much immortal from all the years he's got saved up. What this episode is really about, though, is Bobby. On pretense of finding the secret poker game, Bobby actually goes in to play a hand, in an attempt to get his youth and legs back. Unfortunately, he loses. 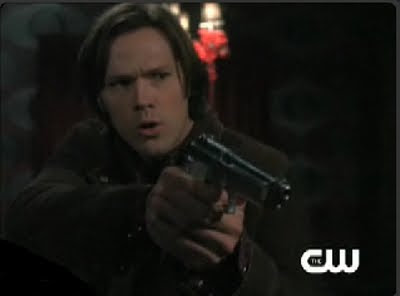 While Sam's at the hotel wondering where everyone went, Dean sits in on a game to win Bobby's normal age back. He buys back Bobby's years, but loses double himself, putting himself at 80. Sammy nearly shoots him when he sees senior citizen Dean in the hotel room.

Chad Everett does a great job as older Dean, and it's funny to see and hear Dean's youthful expressions and dialogue coming out of an 80 year old. It's a tough gig, but you really do believe it's Dean as the episode progresses, so much so that it's a shock when young Dean reappears at episode's end.

Bobby is a great character, and we got to see just how bad his pain and depression has gotten in this episode. He truly feels he's worthless as a hunter, as a person, and has nothing to live for save an Apocalypse. His suicidal tendencies leave Sam and Dean speechless, and Dean is particularly wounded.

The two had a great scene in "The Curious Case of Benjamin Button", where Dean tells him he understands how he feels (having now been older himself), but that Bobby still has value to him. That Dean can't do any of this without him. And that he won't hear anymore crap about Bobby ending it all. Bobby is moved, and grateful. And then of course they both have to act manly and macho and gloss over the whole thing.

We also get some interesting dynamic between the witch and his girlfriend. I like that Patrick wasn't really malicious. He'd just sort of lost any concept of the value of life, and even though he didn't set out to kill anyone, he didn't mind if they died. And he had fun toying with everyone, drunk as he was with immortal power. Quick-witted, clever, and with a wicked sense of humor, even Dean had to admire him.

He gets a dose of reality, however, when his girlfriend decides to end it all, and nearly takes him along with her. She's decided living forever isn't all it's cracked up to be, now that she's buried her aged daughter. Her assumption is that she'll see them on the other side, though Supernatural has hinted in the past that this might not actually be what happens.

So, while The Curious Case of Dean Winchester was one of the lighter sort of "one-off" Supernaturals, it still had some serious, darker elements. Which as actor Jim Beaver says in a great interview on TVOvermind, "it wouldn't be Supernatural without some dark stuff."