Hank and The Middle Pilot Reviews 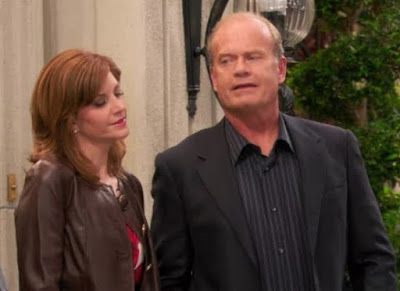 Oh dear. Last night we had two sitcom premieres on ABC for Kelsey Grammar's Hank and Patricia Heaton's The Middle. My overriding thought is that I wish we had both these stars back on the air in the unfortunately short-lived series Back to You (that was unfairly killed by the writers' strike).

Hank is pretty awful. Grammar stars as Hank Pryor, a ridiculously wealthy entrepreneur that for unspecified reasons loses everything. He and his attractive wife and two children are forced to downsize and move back to wife Tilly's (Melinda McGraw) hometown. The whole sitcom is just creaky from the start, looking like a community theater stage play as Hank and Tilly stand outside their former residence and have an awkward conversation about moving on to better things.

I've never liked humor for the sake of humor, whether it fits the characters or not. Hank, who had up to this point been a powerful CEO, apparently moves to a house he's never seen. I doubt that when Hank opened up his first business, he bought a building without looking at it first. But of course this allows us the "funny" moments of the family seeing the dump of a home for the first time.

The show has a few funny moments, and tries to have its heart in the right place by having Hank learn how to bond with his kids again. But thus far it's just too stilted and forced, and Grammar looks like he's forcing himself to go through the motions. Critical reviews seem to be harsh, and I don't think this series will last.

As for The Middle, this one has more promise, but I've never been a fan of sitcoms that celebrate the art of bad parenting. I appreciate that the Indiana family in The Middle is more real and identifiable than the family in Hank, and there are some funny moments--as when Frankie (Patricia Heaton) tells her complaining, slacker, boxer-short-clad teenage son "I can't hear you when you don't have pants on."

Heaton plays the frazzled Erma Bombeck-esque imperfect working mom well, and I do like that while hubby Mike (Scrubs' awesome Neil Flynn) are exhausted by their three nutty children, they still love and care about them. I also like that the children, even the teenage son, listen to their parents and don't think that they're losers. I really despise shows where the kids are smarter and more obnoxious than their parents, and thus far that doesn't seem to be happening here.

It's the little things that I found funny in The Middle, like the board behind Mike's desk at work that says "Days on the job without an accident: 1". After an explosion in the quarry, that goes down to zero. I found the big, spectacular failure moments less amusing, especially when they trampled on a redeeming moment for awkward daughter Sue (Eden Sher).

If The Middle learns to tone down the "quirkiness" and doesn't beat the Charlie Brown repeat loser syndrome to death, I could keep tuning in. And I'd also like to see the show stay on the air just to keep SNL alum Chris Kattan on TV, though I hope they give him a little more to do as Frankie's pal at work.

Watch Hank and The Middle on ABC, Wednesday nights at 8/7c.