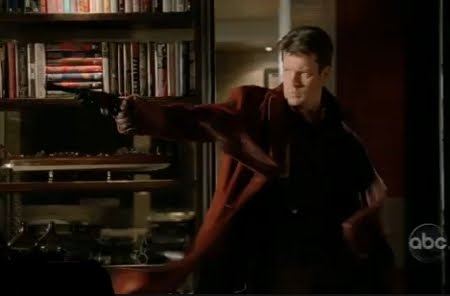 Okay, Castle "Vampire Weekend" had three awesome things going for it tonight. This Halloween episode began with the strapping on of a very familiar gun and donning a brown coat and everyone at home is thinking "Ohnotheydidn't!" Well, they did. We got to see Richard Castle donning a Halloween costume he identified as "Space Cowboy"--a hilarious and cheer-worthy nod to Nathan Fillion's former role as Captain "Tight Pants" Reynolds in Firefly.

As an added punch, his daughter asked, "Didn't you wear that like five years ago?" Nice one.

The second nicely done portion of Castle tonight was the plot. The stake-in-the-heart murder of a pretend vampire was a case with plenty of twists and turns and real complexity. It's a big jump in quality from season one Castle, and the balance between humor and drama is getting a lot steadier.

The third truly admirable high scoring element of "Vampire Weekend" was an example of actual responsible parenting. I've always loved Castle's mature and clever daughter, and the nice relationship that they have. In this episode, he gives her permission to attend a senior party with the caveat that she call if anything starts to go a way she doesn't like.

Things go awry with a drunk friend, the daughter calls, and Castle behaves as a parent should--he rushes to her side, and calls the parents of the friend to let them know what's happened. It was refreshing to not see another "rebellious teen" angle that so many shows and films do now, and also no "cool parent" garbage where the kids get away with murder. Castle is still a cool and loving dad, and his daughter learns the benefits and the unfortunate peer struggles of being a responsible kid.

So once again Castle succeeds in being a nice fluffy entertainment show that actually has quality and value. Not a bad combination. And Fillion still wears the space cowboy look well.