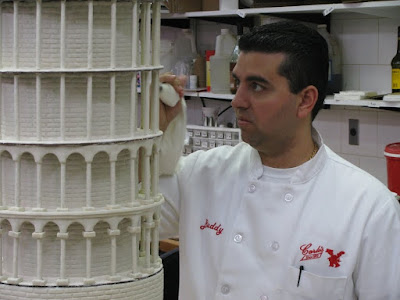 Tonight on Cake Boss, "Leaning, Lobsters, and Lectures", Buddy and his Cake Boss team may have outdone themselves. But before I get into that, let me just tell all you Cake Boss fans that our favorite show has been renewed for another 18 episodes--and should air on TLC in the fall. So, more Buddy and the gang and fantastic cake creations!

The main cake in the episode was for a bridal couple who wanted The Leaning Tower of Pisa, but only if it could be very accurate. Buddy told them that a leaning cake would definitely be tricky, but he was excited to do it and he knows they'll love the final result.

The work that Buddy and the Cake Boss crew put into this was incredible and a joy to watch. Buddy smartly made the cake level, then shimmed it up at the end to add the leaning effect. The cake was layered and frosted around a center support pipe, with cardboard circular supports in between.

The detail was amazing. The Cake Boss crew laid out fondant, then spun a patterned roller over it that made a perfect brick design. They then wrapped the brick sheeting around each layer of cake. Buddy added long toothpick supports between the layers, then wrapped each one with fondant. Then the Cake Boss crew added arches, and Buddy cut out little tiny pillar caps and wrapped them around each little support beam for perfect accuracy.

The whole Cake Boss crew was excited about this amazing project. Buddy thought it needed a more rustic look, and so they added edible highlighter dust to add shadows and an aged look to the "bricks". 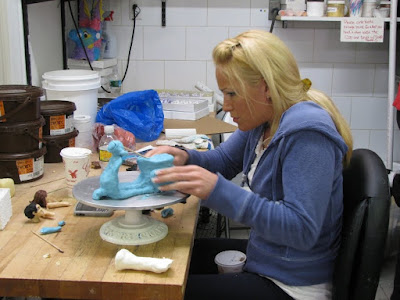 Once it was all done, Buddy carefully added tapered blocks of wood to raise one side of the Tower of Pisa base. Then the Cake Boss crew carefully slid another base over the top to make a level floor and hide the shims. Once covered in fondant, they added Daniella's sculpted masterpiece--a mini replica of the bridal couple themselves riding a Vespa next to the Tower.

The Leaning Tower of Pisa cake was an absolute masterpiece. Not only did Buddy and the Cake Boss crew create a beautifully ornate representation of the Tower, but the added personalization of the couple on the Vespa was inspired. The happy couple were thrilled beyond belief, and there was mad applause from the crowd from the moment the Cake Boss crew entered the room with the cake. Buddy said "They were cheering like we were Bon Jovi!"

For the second Cake Boss creation, we had a best man who came to the consultation with no idea of what he wanted. The guy honestly seemed a little stoned, and Buddy did his best to come up with an idea for the lobster/clam bake engagement party. The best man was thrilled when Buddy came up with a bride and groom lobster getting ready to "take the plunge" into a pot of boiling water.

Things seem fine until the best man reappears some time later in the week and tells Buddy that he confused the dates for the engagement part. It's not next week, after all, it's tonight. Now I'm convinced the guy is/was stoned. Buddy is stunned. His first instinct is that it's not going to happen; there's not enough time. The best man begs for forgiveness and help, and Buddy is way too nice, so he agrees to do the best he can. 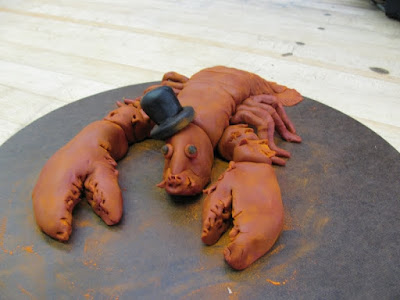 The Cake Boss crew thinks Buddy is crazy and tells him he's on his own. So Buddy whips up a few layers of cake and wraps them in gray fondant to make the pot. He adds handles. Then he creates bubbles by boiling candy sugar and pouring it over a flat tray of ice--the ice melts, but the candy retains the shape of the crushed ice chips and gives it a frothy appearance. Buddy is thrilled that it looks just like a bubbling water and adds it to the top of his cake.

There's a cover partially over the pot, and then Buddy needs to make up his lobster. The Cake Boss crew has a bit of fun when Buddy's cousin brings in live lobsters for Buddy to use as models for his sculpture. It's a hilarious image, seeing a table full of cake making tools, dough, and fondant, with two live lobsters staring up at Buddy.

He finishes up his lobsters with a little shading, then a top hat for the groom and a veil for the bride. He interlocks their lobster claws to show them holding hands. He adds a little edible sign at the bottom that congratulates the couple on "taking the plunge".

The cake is adorable, and Buddy gets applause from the small gathering as he brings over the lobster cake. Buddy's job as Cake Boss is to make people happy, and he once again scores high marks in that category.

Watch the season finale of Cake Boss next Monday, August 17, at 10/9c.