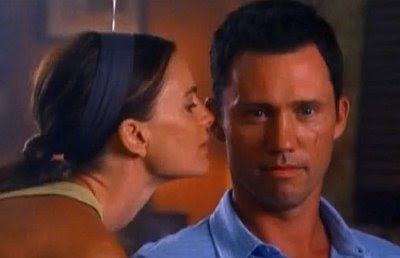 Ah yes. All is right in the Burn Notice realm. Tonight in the finale, "Long Way Back", we got back exactly where we needed to be.

*SPOILER ALERT* Things looked grim for the Burn Notice we know and love as Michael Westen (Jeffrey Donovan) continued his quest to be reinstated by working with the uber slimy Stickler (Ben Shenkman). Beloved Fiona (Gabrielle Anwar) was on her way back home to Ireland, and Michael's mom (Sharon Gless) was selling the family house.

Complications ensue when one of Fiona's old enemies from Ireland (played fiercely by Dresden Files' and Lipstick Jungle's Paul Blackthorne) pops up to kidnap her and auction her off to her other Irish foes. Her brother Sean (Gideon Emery) shows up to warn her, and together they try to put together a plan to save Fiona and get the bad guys arrested.

The first problem is, Sean and Fiona are a lot more prone to violence and nearly get themselves killed. Only Michael's launching of Sam's beautiful vintage Buick off of a parking garage saved them. Argh! That was painful to watch!

The second problem was that Stickler foiled all of their plans by turning Fiona in to the bad guys. Sean got shot, Fiona kidnapped, and Michael eventually got held at gunpoint by Stickler. I admit I was totally shocked when Michael simply pulled his gun and took Stickler down with two hits to the chest. It showed us that side of Michael we sometimes forget about--the cool operative that can kill without flinching.

Fiona nearly drowned as she escaped the bad guys, but Michael pulled her out of the water. Someone, somewhere has to explain to me why in all movies and film, no one ever has water in their lungs. The hero always drags the victim onto shore, lays them on their *back*, and then they open their eyes and recover. Rarely does anyone ever turn them on their side so they can expel all of that water they breathed in. I guess it's not glamourous enough for Hollywood to choke out some reality.

But I digress. Sean survived, and Fiona has to stay in Miami to avoid all the heat she'll get in Ireland. It's Michael's reward for choosing Fi over revoking his Burn Notice--if Stickler could have even done that for him. Somehow that whole thing seemed hinky from the start. The only proof Michael had that Stickler was doing what he promised was from Diego (Otto Sanchez), and I never felt like that guy was on the up and up. And now he's mysteriously murdered, and Michael has no idea who may have done it--and who may be after him now. We'll have to see what Burn Notice brings us in the winter episodes, but previews suggest that Michael is now more burned than ever.

It was nice to see the balance this week on Burn Notice, of Michael's spy skills and his everyday life. I'm glad that he wanted to look at the box of his old model airplanes and other souveniers of his childhood, and he acknowledged to his mom that maybe he wasn't ready for her to move just yet. It was a good episode for all the characters to let each other know how much they cared about one another--even Sam (Bruce Campbell), but hey, don't tell Fi.

PHOTO: Gabrielle Anwar as Fiona and Jeffrey Donovan as Michael in Burn Notice, screencap c2009 USA.
Posted by Valerie David at 2:02 AM