Consultant Dianne hit a double on tonight's Say Yes to the Dress episode, "Two for One". Her bride's small family entourage happened to include another engaged couple who would soon be looking for a wedding dress themselves. Halfway through the first bride's appointment, this second bride-to-be saw the dress of her dreams in a mermaid-style gown. Dianne let her try it on once the first bride found her own dream dress, and Dianne ended up making two sales during one appointment to the tune of $8000. Not too shabby.

Debbie and Carmel weren't so lucky, however, as they consulted with two sister brides getting married three months apart. The Say Yes to the Dress double appointment seemed like a good idea on paper, but as the brides vied for attention and approval from their mother and a third sister, it became clear that splitting their dress shopping time wasn't the best plan.

Further complications arose over budget. The mother had offered to pay $3000 for each girl, but for some reason one sister told the consultant she had a $5000 budget. It wasn't clear if she just made a mistake, or if she'd been hoping her mother would make up the difference, but the mother held firm.

Unfortunately, the dream dress she'd found was out of her mother's proposed budget. Her sister boldly suggested they share the dress so it would only amount to $2500 apiece.

The Kleinfeld's consultants and managers alike were wary of such a proposal. They were careful to point out that if the first sister got a stain on the dress or tore it somehow (which invariably happens) this would cause a big problem for the second sister three months later.

Despite the possibility of a sale, the consultants suggested the sisters sleep on it, rather than making a hasty decision. The Say Yes to the Dress voiceover let us know that the sisters decided not to share after all, which was probably a very wise choice. 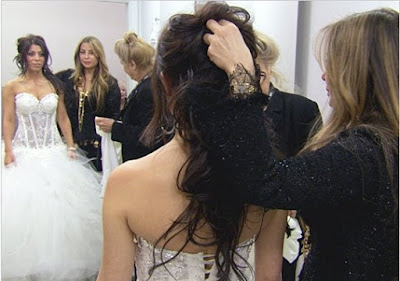 For bold wedding dress designs, check out Pnina Tornai.
These episodes of Say Yes to the Dress continue to stun me, as brides-to-be travel hundreds or even thousands of miles to shop at Kleinfeld's and then try on a dozen of the plainest dresses you've ever seen. They have no decoration, no volume, no flair. Why pay thousands of dollars for such a plain gown?

I understand that fine gowns have nice shape and tailoring, and not everyone on Say Yes to the Dress wants a ball gown, but it seems that it's the latest fashion now to be plain. There's almost a snobbery to it, that lots of beading or volume are somehow gauche. And yet, for the most part, as we watch the brides try on these utterly plain gowns, you rarely see any true excitement over them. The sisters in this "Two for One" episode kept trying on simple, straight, plain dresses and their reactions were the same as mine: blah. Yet it never occurred to them to try on something with a little more pizazz.

C'mon brides! Live a little! Where else can you wear a truly elegant, voluminous, jewel and bead-enhanced gown except at your wedding? Unless you'll be going to presidential balls or royal events, nowhere! So go on, Say Yes to the big white fluffy tulled glittery lacy Dress and enjoy yourself. Everyone will love it, and even if they don't, who cares? It's your day!!

Watch Say Yes to the Dress on TLC Friday nights at 10/9c, right after What Not to Wear.

Posted by Valerie David at 1:18 AM