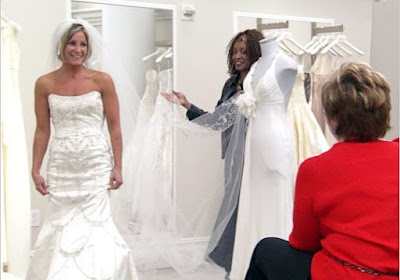 Last night's Say Yes to the Dress episode, "Missing Mom", involved three brides with difficult parent issues. Alla's mom had passed away a few years ago from cancer, and her aunt stepped in to help pick out and pay for the dress. Ellen had lost her father recently, and was using an inheritance from her father to help pay for the wedding. Liz was somewhat estranged from her mother; living in LA herself, she traveled to the East Coast where her mother lives to meet at Kleinfeld's and help pick out a dress.

Kleinfeld consultant Keasha and fashion director Randy helped find Alla a Lazaro gown, a slimmer shaped wedding dress (similar to the Lazaro pictured above) with one decorated shoulder strap. The style of the dress suited Alla, but she wasn't as happy about the lace appliques and subtle beading. She wanted a much plainer dress.

After trying on some other dresses that didn't work, Say Yes to the Dress bride Alla returned to the original gown, and seemed adamant about asking designer Lazaro if the dress could be made without the embellishment. When she showed it again to her Aunt Gigi, however, the aunt said the dress should be left exactly as it was. Within a matter of moments, Alla did a 180 and declared that the dress was perfect as it was.

Randy and Keasha were concerned that Alla was being swayed too much by the aunt, but Alla assured them it was what she wanted. I'm not sure if it was her actual opinion, but I happened to agree with the aunt that the dress was perfect just the way it had been made.

The second bride Ellen had her heart set on a Pnina Tornai gown, and fell in love with the first one. It was a more modest version of the typical Say Yes to the Dress-featured Pnina wedding dress, strapless with lots of lace and a ribbon detail that wrapped around the lower half. The only problem was that it was $6600 and Ellen's budget was around $5000. Kleinfeld's offered her a discount that brought it to $5500 and the family was thrilled.

Ellen thought her father would be happy that she'd found the gown of her dreams with the help of the money he'd left her. I still think $5000 would have made a nice deposit on an apartment or helped with the downpayment on a townhome, but everyone has different priorities, and maybe Ellen didn't need the money for her future. 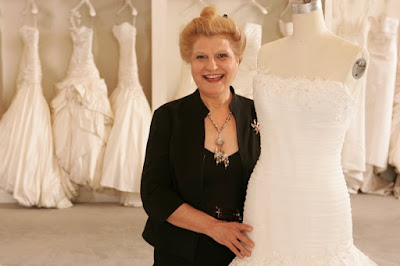 Meanwhile, down in the Kleinfeld alterations room, Say Yes to the Dress bride Timoria was trying on her sample sale dress. With an ill-fitting top and some damage to the tulle bottom, Timoria was starting to wonder if she'd made the right decision buying an imperfect wedding gown.

Not to worry, however. Wizard alterations guru Vera Skenderis and her seamstresses know how to fix nearly everything. Vera reassured Timoria as they tore away an armful of tulle. It's always the sign of an expert when they have no problem doing something that scares the pants off of anyone watching--and it all turns out well in the end. The redesigned tulle bottom looked as if it had been made that way, and the bodice would be fixed up to suit Timoria's figure in time for her wedding.

Say Yes to the Dress bride Liz found a simple, elegant dress from the start that she liked but her mother didn't. With completely different styles, and different body shapes, it was obvious there was a difference of opinion and even some mother/daughter friction going on. When Randy asked the mother if Liz wanted something to accentuate her curves, the mother scoffed and said "No, *I'm* the one with curves!"

The Kleinfeld consultants did their best to get Liz a dress that would make them both happy, but it wasn't meant to be. The voiceover at the end said that Liz returned to LA and found a dress she liked--without her mother's help. It was sad to see, but it's a common occurence on Say Yes to the Dress. Parents and family members are often too concerned about their own tastes (or own missed opportunities) and forget to consider what the bride wants or likes.

Watch Say Yes to the Dress on TLC, Friday nights at 10/9c. Check your local listings for encore showings and repeats.