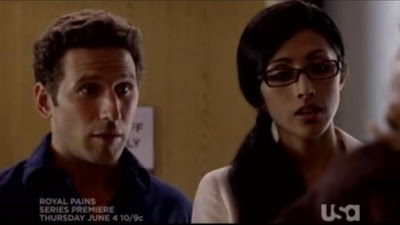 Royal Pains episode 3, "Stategic Planning", was a definite improvement over episode 2. It offered more focus on the patients, and Dr. Hank's quick thinking, than on "romance" and "issues".

Royal Pains is still a balance of good and bad. Margaret Colin (Gossip Girl, First Daughter) put in a stellar performance as a politician's wife who seems to be worried more about The Plan for her family's political success than her son's well-being. Christine Ebersole (Confessions of a Shopaholic, Related) once again turns in a wonderful and humorous showing as plastic surgery addict "New Parts" Newburg, the only woman on the show that can handle Evan's creepiness and somehow make it all less creepy--which is quite a feat, I can tell you.

I was glad Boris (Campbell Scott) was back in this episode, ominous as ever, making Dr. Hank once again question the sanity of accepting this mysterious man's generosity. Dr. Hank held up well each time Boris tried to get info out of him about his patients (info he already seemed privy to), and it wasn't clear if Boris was just testing his privacy ethics on behalf of his friends or to see if Dr. Hank would be a good spy for him.

Mark Feuerstein as Dr. Hank is charming as ever, and I enjoyed his interactions with Divya (Reshma Shetty), his Girl Friday aka physician's assistant. I like that he picked up on the way their wealthy clients looked down their nose at his "assistant" and let Divya know that perhaps her title should be "associate".

The show's heart is in the right place, trying to cover moral and ethical issues, the health care system, work and personal relationships, etc. Unfortunately, the role of the brother Evan (Paulo Costanzo) seems to be part of an agreement the Royal Pains writers made with the network--they'd write all that boring morality and women's rights stuff, as long as Evan gets to hang around with hot chicks in bikinis every episode. Hot, stupid chicks, who still hang around with guys they find disgusting, as long as he's got a hot tub and liquor. It's nauseating, and I wish they would stop.

I also wish they would stop Hank's "romance" with Jill (Jill Flint), the hospital administrator. The chemistry is just not there, as hard as they try. I don't know why Hank needs a love interest so soon in the Royal Pains series, anyway. He was engaged to be married and then five minutes later he's looking for a new girlfriend? It doesn't fit with his character.

Royal Pains is enjoyable if you check your brain at the door and enjoy the doctor-saving-the-day and quirky humor parts and ignore the crappy lowbrow stuff. It could be a really enjoyable show if they cut out the dead weight, but I'm not holding my breath.