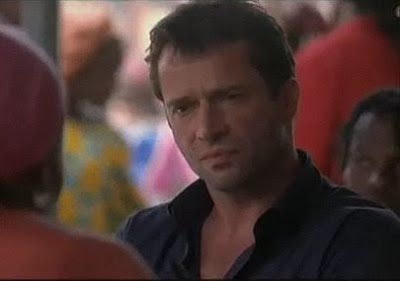 NBC has been hyping The Philanthropist like crazy, and tonight we finally got to see the pilot episode. My first impression is that it needs work, but I give it credit for trying. The Philanthropist attempts to be very arty, shooting scenes through fences and jumping the camera around and trying to make it all so Noble and Meaningful.

The story surrounds billionaire Teddy Rist (James Purefoy), a spoiled playboy used to getting anything he wants just by flashing some cash around. While trying to manipulate his way out of a hurricane in Nigeria, Rist suddenly sees a young boy huddling in the corner out of his mind with fear and insists that the boy be put on the lifeboat ahead of him.

A moment later, a man leaps onto the overloaded boat so that he can be saved as well, and the whole boat overturns. Rist leaps into the water and rescues the young boy, an act that he tells us in narration is not his usual M.O.

The frame for this story is Rist sitting in a bar, chatting up a pretty bartender (Gloria Votsis) by telling her the tale of his helping a small village by bringing them much needed vaccines that the goverment is holding hostage. The barmaid doesn't believe a word of what he's saying, and quite frankly, we the audience aren't buying much of it either. 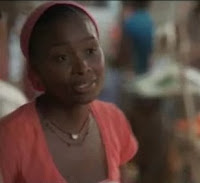 The whole thing smacks of self-indulgence, of once again focusing on a rich white man as he "digs in" to the local culture and spins around in the dirt feeling enlightened. We're just about to gag on it all when Rist gets his smug ass handed to him by Dr. Balo (Bonnie Henna), the Harvard-educated woman hoping to get the vaccines to the people who need them:

"This isn't about helping me or anyone else, is it? This is about you, playing the role of the charming, rich businessman who travels the world, getting his hands just dirty enough to go back home and tell all his American friends how meaningful his life is compared to theirs."

This wakes Rist up somewhat, and after that the pilot of The Philanthropist picks up quite a bit. Determined to prove to Balo that he's more than just a playboy, he promises he'll get the vaccines to her the next day. When using just money doesn't get him where he needs to, he starts using ingenuity, including hitching a ride on a drug dealer's helicopter.

I adore James Purefoy, and he always draws your attention, even in smaller roles (Rome, Knight's Tale, Vanity Fair, Mansfield Park). He has the capability to make Rist watchable, but they need to drop some of the High Art of the show and focus more on the action. The stories and characters should speak for themselves, and I feel we're being forcibly manipulated instead.

Pilot episodes can frequently feel forced, as creators try to give us extremely interesting characters and stories that grab us right away. The good shows will start to smooth out after 2-3 episodes, and the actors settle more comfortably into their roles. I'm hoping that will happen here.

I'm also hoping that all the episodes won't be framed as flashbacks with narration--when we were just focusing on the action of Rist pushing through the jungle, all on is own without shoes, direction, or hope of finding his way, that was good drama. The narration in other scenes just made everything seem trite instead of moving.

As I said earlier, despite its flaws, I have to give The Philanthropist an A for effort. I almost feel like NBC is trying to take a page from Studio 60 by taking quality programming that would normally air on cable and putting it on a mainstream network. Unfortunately they bailed on Kings before it even got started, and it will be interesting to see if they continue to back The Philanthropist once the initial fanfare is over.

Watch The Philanthropist on NBC Wednesday nights at 10/9c.