You all just have to check out TLCs new documentary series Cake Boss. Each week we follow cake artisan Buddy Valastro as he creates one-of-a-kind cakes, with the help of his large and boisterous Italian family, for their bakery in Hoboken, New Jersey. Turns out the show is not only intriguing and awe-inspiring--the cake designs are truly works of great sculpture--but it's also a riot.

Buddy and his mom, sisters, brothers-in-law and friends at Carlo's Bakery are a lot of fun to spend time with. Sure, there are some family squabbles, but it's kind of like Joey on Friends getting in trouble with his lookalike pack of sisters. Cake Boss has a good-natured slant, with family members joking around and playing pranks on one another in between working together to finish their latest projects.

You wouldn't necessarily think of cake-making as a stressful job, but Carlo's Bakery is nonstop action every day, with orders pouring in every hour. When you're dealing with food, you can't make anything that far in advance, so every cake by nature is made on a deadline. There's little time for screw-ups or do-overs. And some of Buddy's clients have outrageous and ambitious requests, all of which have to be planned meticulously and completed in a short amount of time. 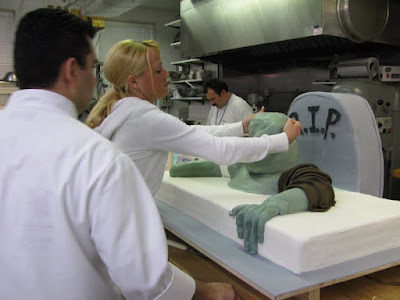 Buddy tells us that he's used to making wedding cakes and pretty flowers, so the zombie request is a bit out of his element. He works with his crew for ideas and they manage to come up with a workable idea for a zombie climbing out of a grave, complete with dead rats and body parts and blood strewn all around.

It's amazing to watch as the Cake Boss crew puts this giant cake together, forming the headstone out of pound cake and icing and coating it with gray fondant, then building an entirely edible zombie bursting out of a red velvet cake ground covered in chocolate sprinkles to simulate dirt. It's a gory, terrifying monster cake and the zombie crowd goes crazy for it--literally. Buddy looks a little startled as partygoers decked out in full zombie gear start pulling the mock body parts off of the cake and gobbling them up with dramatic zombie-like flair.

Buddy tells the Cake Boss crew about the proposal and then comes up with a game plan. Each one of the girls will create a naked stripper man, and the guys can concentrate on making the stage. Then he decides that his cake artist protege Tone Tone, who's related to the bachelor party girls, should make a stripper as well. Tone Tone, he rationalizes, is gay, and has no doubt been to a few strip joints and it's his referral after all.

It's an outrageous scene as we watch the girls and Tone Tone modeling little naked men out of modelling chocolate. But Buddy reminds us that it's also a challenging task--the people they usually create for cakes are clothed, so if they don't look exactly right, the clothes will cover it. These little cake men have to be perfectly shaped and sculpted and anatomically correct.

The big laugh comes when Buddy notices Tone Tone's stripper is so well endowed that...well, they blur out the screen, but we get the idea that this stripper is nearly literally a tripod. No doubt this will be a hit at the bachelorette party, but then Buddy's mother walks in and sees all the naked stripper cake men and goes ballistic.

Buddy and his brothers-in-law, all big Italian men, all turn into hunched little boys as Buddy's mom yells at them that Buddy's the cake boss, but she's the Boss. And that they can't make the cake unless they have some clothes on the cake men.

Bowing to Mom's wishes, the sisters all start creating little cowboy outfits, G-strings and boxer shorts for the strippers. In the meantime, Buddy and the rest of the guys create tiles for the stage floor, dipping them in colored sugar to make them sparkle. All seems to be going well when Mom sees the clothed stripper men, but then she opens the cake refrigerator and finds Tone Tone's still-naked stripper man staring her right in the face.

The whole Cake Boss crew falls over with laughter at her howling, shocked reaction, and even she has to laugh. "They're going to have to cut half of that off just to get pants on him!" she exclaims.

Buddy finds the perfect solution. He covers the shocking stripper with an apron, which he removes when they bring the cake to the bachelorette party. Thus, he gives them what they want, while the rest of the costumed strippers made his conservative mom happy. Buddy is once again startled, but pleased at the bachelorette party's enthusiastic reaction to his cake. "You'd think I brought actual strippers!"

Which brings us to the theme of Cake Boss: There's madness, mayhem, wild creativity under extreme pressure, but what it all comes down to is making the customer happy. Buddy's joy comes from seeing the happiness his creations bring to others, and that's not a bad theme for a show to have.


Watch Cake Boss on TLC, Monday nights at 10/9c. Check your local listings for encore showings during the week.