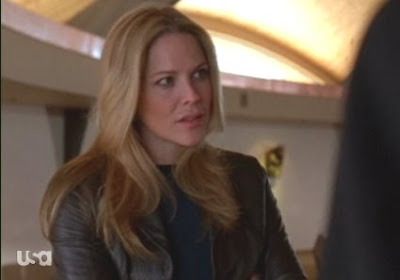 While roles for women in film continue to be of low value--or completely non-existent--roles for women on TV have been showing some bright, shiny signs of improvement. TNTs successful police dramas The Closer and Saving Grace not only have women as leads, they have complex female characters over 40 who are strong and sexy and damn good at their jobs. These tough lady characters no doubt owe something to their ensemble drama predecessors on CSI, Without a Trace, and especially Cold Case.

In that same police drama genre, we have USA's offering of In Plain Sight. This quirky series that balances comedy, snark, adventure, and heavy drama kicks it up a notch when it comes to female characters. We have the central character, U.S. Marshall Mary Shannon (Mary McCormack), but then we also have her alcoholic mother Jinx (Lesley Ann Warren) and trouble-magnet sister Brandi (Nichole Hiltz). 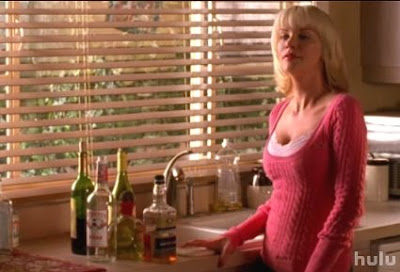 What's startling about the Shannon family dynamic is that Mary's mother and sister are more than just cliches or props to insert a monkey wrench into her daily life as a marshall. Over the past and current seasons, we've gained insight into who these women are and why they act (or act out) the way they do. Warren does a perfect job melding the infuriating irresponsibility and painful vulnerability of Jinx, a lost and lonely woman who passes her suffering on to her children. At first glance, Brandi is just a dumb blonde who dates losers and sponges off her sister, but over time we see how she's been scarred by her family's past and present troubles. Hiltz also adds a sweetness and naiveté to Brandi's well-intentioned bumbling that slowly wins us--and Mary--over.

This season I was skeptical when In Plain Sight added an "office manager", Eleanor Prince (Holly Maples), to the U.S. Marshalls' office. It seemed, at first, that she was just going to be an annoying biddy who would be a thorn in Mary's side. I should have had more faith in In Plain Sight, because Eleanor has turned out to be so much more. At first blush she's an old school proper lady with an obsession for organization and procedure, but she's also got this tough, street-wise side that has been coming out more in each episode. She's got more skills than Mary expected, like calling in favors (or political blackmail) to get information out of other police divisions, or placing a well-timed phone call to an obnoxious district attorney's boss. Eleanor is clever and savvy and doesn't take crap from anyone.

(*SPOILER ALERT* I'm less happy about Eleanor's romantic ties to Mary's boss Stan McQueen (Paul Ben-Victor), though I called that one from Eleanor's very first appearance on In Plain Sight. I would have rather she was a more mysterious character who stood on her own, apart from any male influence, but I'll reserve full judgement until I see how the series plays out for her.)

In Plain Sight is a quality step forward for women's roles on TV. It's not a "chick show" in the sense that it only focuses on women's issues or traditionally female themes. Mary kicks ass without in any way diminishing her male partner Marshall Mann (Fred Weller) or other men in the series, so it can't be dismissed as anti-man. The adventures of the witness protection program offer mystery, action, comedic elements, and drama that appeals to both genders. In Plain Sight is just a flat-out entertaining and quality show that respects women enough to actually give them something to do.

Watch In Plain Sight on USA Sunday nights, at 10/9c.