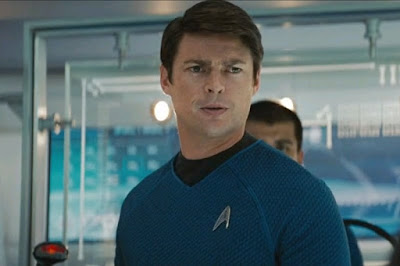 Karl Urban as Dr. Leonard "Bones" McCoy in the new Star Trek.
When the cast list started making it into the press for the new Star Trek film, I thought many of the choices were excellent. Zachary Quinto, in particular, seemed made to play Spock. The casting looked to be following the age ranges correctly as well.

While his age was right, I was skeptical about Karl Urban as the choice to play our favorite space doctor "Bones" McCoy. Sure, Urban was striking, powerful, and menacing in macho roles for Lord of the Rings, Bourne Supremacy, and Chronicles of Riddick. How was he going to play the wiry, crotchety, spiky doc who rolled his eyes at Kirk, grumbled his exasperation at his green-blooded antagonist Spock, and most often supplied the moral center and voice of reason against his more rash and analytical friends?

The answer is: brilliantly. Karl Urban breathed new and exciting life into McCoy, reminding all of us who watched the original Star Trek series (either when aired or in reruns) why we loved Bones so much. His first growly meeting with James T. Kirk (Chris Pine) is a joy to watch as he complains about his divorce-induced poverty and then energetically rants about all the ways one can get killed while on a space shuttle (the perfect nod to our doc's fabled fear of using the transporter and tearing himself into tiny molecular bits).

Urban gives McCoy his lovable crankiness and passionate rages against Spock's icy demeanor, and doesn't skimp on his intellect, quick thinking, and loyalty to his friends. His rapport with Pine's Kirk is an instant reminder of the emotional and diehard friendship we've always loved in the series. And of course it wouldn't be McCoy without derisive mutterings about Spock's green blood, and Urban lands the snarky jibes perfectly.

The New Zealand native doesn't try to imitate DeForest Kelley's distinctive accent, but there's a hint of a twang to his ascerbic wit that hits the right notes--and after all, if you check a map, Kiwis are pretty much the Southerners of the whole world.

To put it simply, Karl nailed it. In an interview with Film.com, Urban admits to being a Trekkie who watched the whole Star Trek series when he was a kid, and then again with his own son. It shows in his performance how much he knows and loves this character.

And if you don't trust me, just ask Leonard Nimoy:

"When Karl Urban introduced himself as Leonard McCoy and shook hands with Chris Pine [as Captain Kirk], I burst into tears. I thought that performance of his would be so moving, so touching, so powerful, as Dr. McCoy that I think [DeForest Kelley] would be smiling, and maybe in tears as well." -- Film.com, May 7, 2009.