Cupid Pulls All the Right Heartstrings 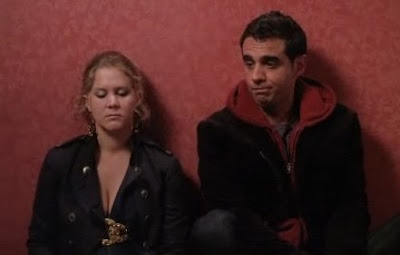 While it seems that Cupid's chances of survival on ABC are slim, I still can't help watching this flawed but eminently charming show. Sure it's cliched and silly and sometimes has holes of logic that you can drive a truck through, but like paperback romances and fluffy summer movie rom-coms, sometimes it's the thought that counts.

I was actually thinking the other day that Cupid is in the same sort of genre as that old ship o' cliches, The Love Boat. Sure it was corny and ridiculous, but you got to see all of these great character actors every week, have a few laughs, and leave with a happy sigh for the happily ever after couples who solved their problems with the help of the perky and quirky staff on a cruise.

With Cupid we have the super cool and ridiculously endearing Bobby Cannavale as Trevor, a man who may be an actual Greek god, or just a handsome, lovable guy with personal problems and delusions of grandeur. We also have his psychiatrist Dr. Claire McCrae, played by Sarah Paulson with a mixture of exasperation, cynicism, and occasional reluctant bemusement. It's often a thankless role, as she has to play hardass to Cannavale's playful imp, but this week's episode "Shipping Out" allowed us to see more of her fun and sexy side--which gave us the best chemistry we've seen so far between her and Cannavale.

Trevor is all lust and romance with no thought of consequences, and Claire is all consequences with no passion, but when the two of them work together they manage to bring deserving couples together from meet cutes to destiny. It's syrupy and silly, but the snappy dialogue and the dips into realistic drama help keep the show from going completely off the rails.

"Shipping Out" was worth it just for Trevor's theory that how people dance illustrates the way they have sex--his demonstration of these various dance moves was all at once sexy and disturbingly familiar and hilarious. And then Claire (who has shunned dancing since being made fun of as a teenager) finally gets to have her star moment when she lets loose and pulls out some sexy moves of her own--and captures Cupid's immediate attention. The little number they do together is just the sort of thing that has you grinning even after the show is over.

So sure, Cupid's not perfect. But I'm going to enjoy my little slice of cheesy romance pie as long as it's being offered.