Tonight was the long-awaited introduction of Jeff Goldblum to the Law & Order: Criminal Intent TV show on USA. I seem to remember a few rumors circulating that the episodes with Goldblum weren't coming together right, and the premiere of CI kept getting pushed back. These rumors were denied by the network of course.

Having now seen the episode, I can see where there might have been some trouble finding their footing. This has nothing to do with Goldblum, whom I've always enjoyed onscreen. The problem is the introduction of another quirky CI detective, who is tall, and works with a small woman partner who is the sensible one. They had to try and create a character that wasn't just a lame rip-off of Goren (Vincent D'Onofrio), and a duo that wasn't a rip-off of Goren and Eames (Kathryn Erbe).

Tonight's Law & Order: Criminal Intent episode, "Rock Star", was a solid episode. Detectives Wheeler (Julianne Nicholson) and Nichols (Goldblum) find themselves investigating not one, but two murders of young aspiring artists living in a sort of hostel/commune in a building that should probably be condemned. With a group of wannabes all vying for attention and grasping at fame, with an almost-famous musician as their slumlord/talent manager, there is plenty of drama and motives to go around for the killings. Neither the detectives nor us know who's responsible until the very end of the episode.

For me, the jury's still out on how this new pairing of Nichols and Wheeler will go. Right now Goldblum's Nichols seems to be a little more spacey and whimsical, and not quite as aggressive as Goran can be. I enjoy the way he knows all sorts of pop culture references, both new and old. He seems quickly able to adapt to each person's frame of reference, making them feel like he's hip to what their experience is like. That's a helpful trait when trying to get information out of people.

With a missing seven years in his career, however, they're leaving room for some possible dark corners in Nichols' life. Personally, I'd rather find out that he's been visiting odd tourist attractions like the world's largest ball of string, or something along those lines. I'd prefer it if he didn't have a tortured past, as that's Goren's realm. 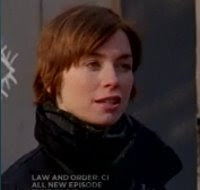 I liked Julianne Nicholson fine when she was on the short-lived Law & Order spinoff Conviction. I've never felt she was a good fit for this role, though, but maybe it's the pixie haircut throwing me off. She's just a little too much Mia Farrow in Rosemary's Baby and it doesn't suit the tough cop image at all. Her character is also something of a wet noodle, so it's a bit tough to get invested in her from week to week. The good news is the dynamic between her character and Nichols seems to be better than what she had with Logan (Chris Noth).

So I'm reserving judgment on the new team on Law & Order: Criminal Intent. I'm excited to see Goldblum back in action, and hope that they'll keep his character interesting and on the lighter side.

Tune in to Law and Order: Criminal Intent on USA Sunday nights at 9/8c.