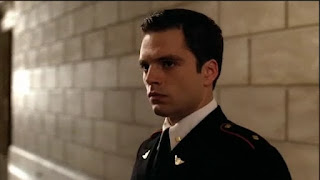 *SPOILER ALERT* Last night's Kings episode "Judgment Day" had lots of angsty David (Christopher Egan), and lots of angry Prince Jack (Sebastian Stan). With the upcoming furor of Judgment Day, when King Silas (Ian McShane) reconsiders ten cases that were already ruled on by the courts, Prince Jack's plotting reaches epic heights as he does his best to ruin his rival.

Using his mouthpiece Katrina Ghent (Leslie Bibb), one of the ministers appointed by the King, Prince Jack ensures that David's brother gets the full sentence for treason. Prince Jack first pits David and Princess Michelle (Allison Miller) against one another for the tenth slot on Judgment Day's roster, and then offers David a deal--if he speaks publicly against the King, then Ghent will influence the court to show leniency.

To both Jack's and Katrina's surprise, David won't participate in political dealings, even to save his brother. In that way, he's just like his brother--who wouldn't recant his principles either. Jack is furious, but Katrina is impressed. She spurns Jack's advances, and insults him to boot, and then goes to speak to the King--subtly letting him know about David's honor.

The princess Michelle confronts her brother Jack when she realizes he has orchestrated all of this to ruin David. She accuses him of playing with a man's life for spite, but he counters that it's for his own life. He fears her and David marrying, ascending to the throne and leaving him out in the cold. Once again Sebastian Stan does a marvelous job of showing Jack's desperation--he's done horrible, cruel things, but out of his own fear and agony.

One of the best scenes in the episode comes when the King tells David that he has spared his brother's life--and given him a 6 month sentence. The extremes of the sentence, he said, allowed him the right to intervene with his divine wisdom. In a burst of emotion, David hugs him, catching King Silas completely by surprise. The lamb amongst all of the lions, David may change this family yet.

Watch Kings on its new day, Saturdays on NBC at 8/7c.

Posted by Valerie David at 1:03 PM