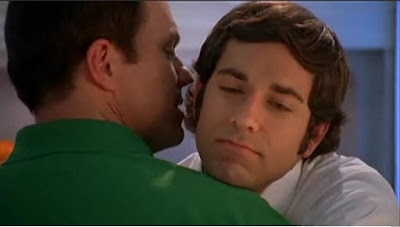 Tonight's season finale of Chuck, "Chuck Versus the Ring" was aptly named. Like LOTR: Return of the King, this finale had about three separate endings, with various forms of cliffhangers and jaw droppers.

*SPOILER ALERT* To be honest, last week I thought "Chuck Versus the Colonel" was the final episode, what with Chuck getting the Intersect out of his head and vowing to lead a normal life. That was just the beginning of the roller coaster ride, however, as evil genius Ted Roark (Chevy Chase) turns up at Awesome (Ryan McPartlin) and Ellie's (Sarah Lancaster) wedding to threaten the entire day. To add insult to injury, Chuck finds out that Sarah (Yvonne Strahovski) is going to be partnering up with Bryce Larkin (Matthew Bomer) on her next mission.

As per usual, Chuck's spy games destroy his sister Ellie's wedding. What I've always liked about Chuck, though, is the heart behind the show. In this episode, everyone rallies around Chuck. Whether they know his reasons for needing help or not, Morgan, Lester, Jeff, Casey, Sarah, Awesome, and even Bryce do the right thing to save Chuck and subsequently save Ellie.

I've particularly liked the arc over this season with Casey, as he's grown to respect Chuck and actually display a modicum of warmth toward him. We get to see Casey as more than just a robot warrior--what he has are actually a lot of good qualities like loyalty and honor. He never stops being Casey, though, as he gives Chuck his personal number "in case of emergency" and tells him he better only use it if "his fingers on fire while he's dialing".

Turns out that Fulcrum agents threatening his sister's life is the equivalent of "fingers on fire" and Casey brings a whole team in to save the day--after Bryce and Sarah buy him enough time to get in to save the say. So good guys win all around on "Chuck Versus the Ring".

So we think. Chuck uses his government send-off check to throw Ellie a new and improved beach wedding, and Bryce figures out that Sarah's not coming with him after all. It seems like happily ever after until we see a rogue agent kill the captive Roark and all of Casey's men--only sparing Casey's life to repay Casey saving his life once. Turns out the agent's not Fulcrum, so who is he?

When Bryce gets kidnapped, Chuck, Sarah, and Casey spring into action to try and save him. Bryce gets fatally wounded, and tells Chuck to destroy the new Intersect. Chuck does destroy it, but not before he re-downloads. Bryce had said something to Chuck's father earlier about some new upgrades to the Intersect, and we get to see them in action here as Chuck amazingly kicks the butt of everyone in the room with his new kung fu moves. Which leads to the episode's best line, when a stunned Casey mutters "Chuck me!"

So, there you have it...a mysterious powerful organization that's not Fulcrum, Sarah showing Chuck some love, Chuck back to being the Intersect but with new mad spy skills? Oh yeah. Awesome.

And pleaaase tell me that they dragged Bryce offscreen so he can possibly have yet one more back-from-the-dead moment? And no, this is not entirely because he is so incredibly hot that it's tough not to whimper embarrassingly every time he's on screen. Matthew Bomer really makes for an incredible spy of James Bond levels--he's handsome, suave, and his killer skills when it comes to getting out of tight situations are amazing to watch. Bomer has speed and agility and grace that totally sells his character as a super spy. It's like the screen just jumps to life the moment he starts spinning, kicking, and shooting his way out of impossible odds.

If Bomer doesn't come back, please give this man his own show. Or movie. Or something. He deserves it.

Honorable mention: The second best quote has to come from Awesome's dad, played by the awesome Bruce Boxleitner. Staring up at the altar as Jeff and Lester rock out "Mr. Roboto", he asks, "Why are you letting Sam Kinison and an Indian lesbian ruin the wedding?"